Pentagrams in the Churchyard

The day after Halloween, we visited St.Andrews churcyard in Cherry Hinton, Cambridge where I found this Pentagram carved on an old tomb stone. The lettering was very worn and difficult to decipher. 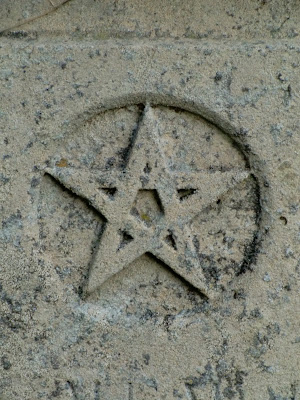 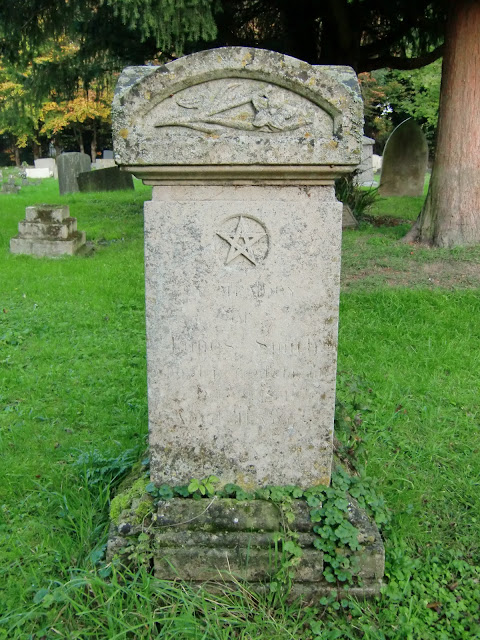 A pentagram is the shape of a five pointed star, comprising of five straight lines that cross over one another, with a single point at the top in an ascended position. Pentagrams were used symbolically in Ancient Greece and Babylonia and are used today as a symbol of faith by many Neo Pagans, akin to the use of the Cross by Christians and the Star of David by Jews.
Christians have also used the pentagram to represent the five wounds of Jesus and the Freemasons have associations with it too, as do a number of other belief systems.
The Chinese five-element philosophy of Feng Shui, the natural balance between fire, water, earth, wood, and metal, states that the direction it is pointing has nothing to do with good or evil, but rather the upside-down facing circle is for banishing.

The circle drawn around a pentagram transforms it into a pentacle, and in most traditions this represents a symbol of Protection and of Sacred space. The top point represents true spirit; or the Goddess, the other four points symbolize the elements of creation; Earth, Air, Fire, and Water. The star as a whole, symbolizes the spirit bringing the elements into natural harmony, the opposite of chaos; a concept taught by Empedocles, ca. 475 BC.
In this upright position, the pentacle can represent spirituality's dominance over the material ‘pentagram’ bound inside the laws of the cosmos ‘outer circle’. The upside-down facing pentagram therefore, has connotations of the physical world ruling over the spiritual, and has therefore been associated with dark magic.

Posted by Taphophilia Catafalque at 12:05