Cemeteries of the World - Zorgvlied - Netherlands

Last week we spent a relaxing time on a houseboat in Amsterdam and of course it was an ideal opportunity to explore another Cemetery of the World. The mature trees disguise the cemetery when veiwed from above 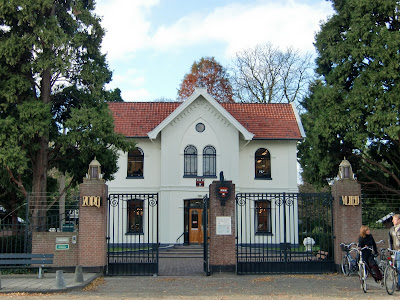 Zorgvlied Main Entrance
Of the two largest cemeteries there, we chose to visit Zorgvlied, which is one of the most famous cemeteries in the Netherlands. This Amsterdam cemetery, which lies on the west bank of the Amstel river was founded in 1870.
In the 13th century the land to the south of the city, along the Amstel river was known as the 'Garden of Amsterdam'.
At a public auction, a meadow on the Amstel dyke was bought. A country house had formerly stood on the site. This was later to become Zorgvlied, the name refers to the place where the 'Worries Flee'. The original site was three acres and was Fl. 5450, (about € 2480) . Expectations of the purchase were high because of the excellent location on the Amstel and the ability to transport the deceased by boat. 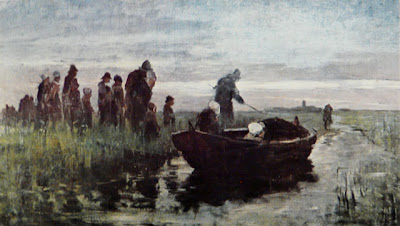 Petrus Van der Velden - Marken Funeral Barge
On November 2, 1870, Mr. Fox  became the first tomb owner and the first burial was that of Mr G. Ring on December 6, 1871.
Because of the sceneic location on the Amstel River and dignified peace it radiates, the cemetery was very popular with the Amsterdam bourgeoisie and Zorgvlied became a household name. 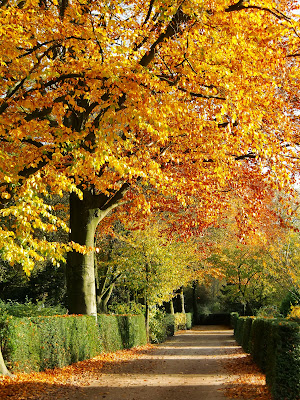 The garden architect Jan David Zocher Jr (and in the period 1891 to 1892 his son LP Zocher) designed the cemetery in the style of an English landscape garden, where nature as much as possible was simulated: scattered groups of trees, intimate corners and unexpected vistas.
Zorgvlied's continued success meant that over time, several extensions were necessary and each expansion was according to the tastes and demands of the particular era in which it was constructed. CP Broerse designed most of the postwar expansion and BJ Galjaard the Muslim section of Rosa Alba.
The current director AHF Nesvadba is focusing on renovating the entire site, seeking the expansion of cremation graves.
Zorgvlied therefore has a unique combination of Zochers romantic style and the modern constructions of the 1960's.
Zorgvlied now encompasses 16.5 acres with 60 kilometers of pathways and 17.00 graves. There are more than 2400 trees of which there are 200 different species.
Visiting such a large and interesting 'Sleeping Garden' can be quite tiring, but there are fold up chairs available to make your stay as comfortable as possible. 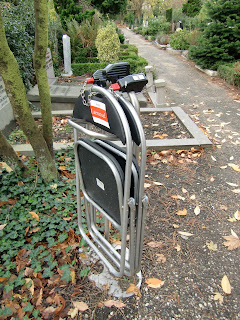 The graves themselves are in an immense variety of styles, with grand 19th century tombs of wealthy families and the uniformity of post war graves. Headstones of more recent times show a much more personal character that reflects the individuals of Amsterdam.
In the 1980's attitudes towards conventional funeral procedures changed and the bereaved wanted to be personally involved in the funeral of their loved ones. Pall bearing and the playing of music themselves.

The funeral of Nightclub owner, Manfred Langer was one such funeral.

In the summer of 1994, Manfred was unexpectedly told that he had throat cancer and did not have long to live. Only a few months later, on the 21st of November, he died at just forty-two years old; the spotlights were turned off and the curtain fell for this legendary man. Yet, even at his funeral, Manfred had a gigantic spectacle staged. Twenty limousines followed the pink one that carried him to his last place of rest. Ten thousand friends, acquaintances and the curious attended the ceremony. Even national and international TV stations followed the spectacular affair. At the graveside, everyone got a small bottle of vodka (Manfred’s favorite drink), which everyone drank and then threw into the grave.
A life size statue of Manfred stands beside his grave 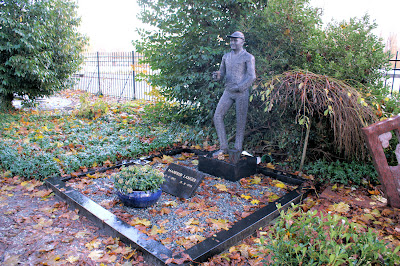 Whilst Zorgvlied has many famous Dutch buried here, it is not exclusive and like the city of Amsterdam, it is open to people of all denominations and cultural backgrounds.
Chinese, Muslims, Bahai, Buddhists all have their own place here, including many liberal Jews. However Orthodox Jews may not wish to be buried here due to their belief against the site of a grave being cleared after the lease expires.
The graves of war victims and resistance heroes are scattered throughout the cemetery and there is also a 'field of stars' for premature babies.


Of the many famous Dutch buried in Zorgvlied, some of their admirers have taken the initiative to plan walks around the graves of certain celebrities.
The information centre at the main gates is very helpful and friendly and speak English and so if you want to formulate a walk in memory of a person for others who also have a special interest, you are welcome to do so.
Posted by Taphophilia Catafalque at 09:17