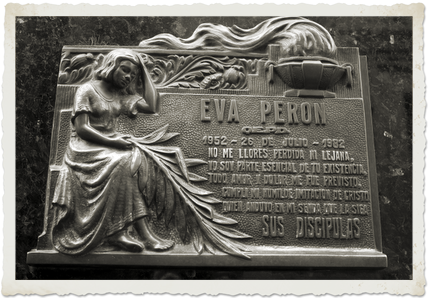 60 years ago today Eva Peron,  Argentina's First Lady from 1946 ~ 1952 died from Cervical Cancer at the age of 33 years old.
The story of her life was like the fairytale of Cinderella, but what happened to her remains after her death are stranger than fiction, when three years later her embalmed body mysteriously disappeared........... 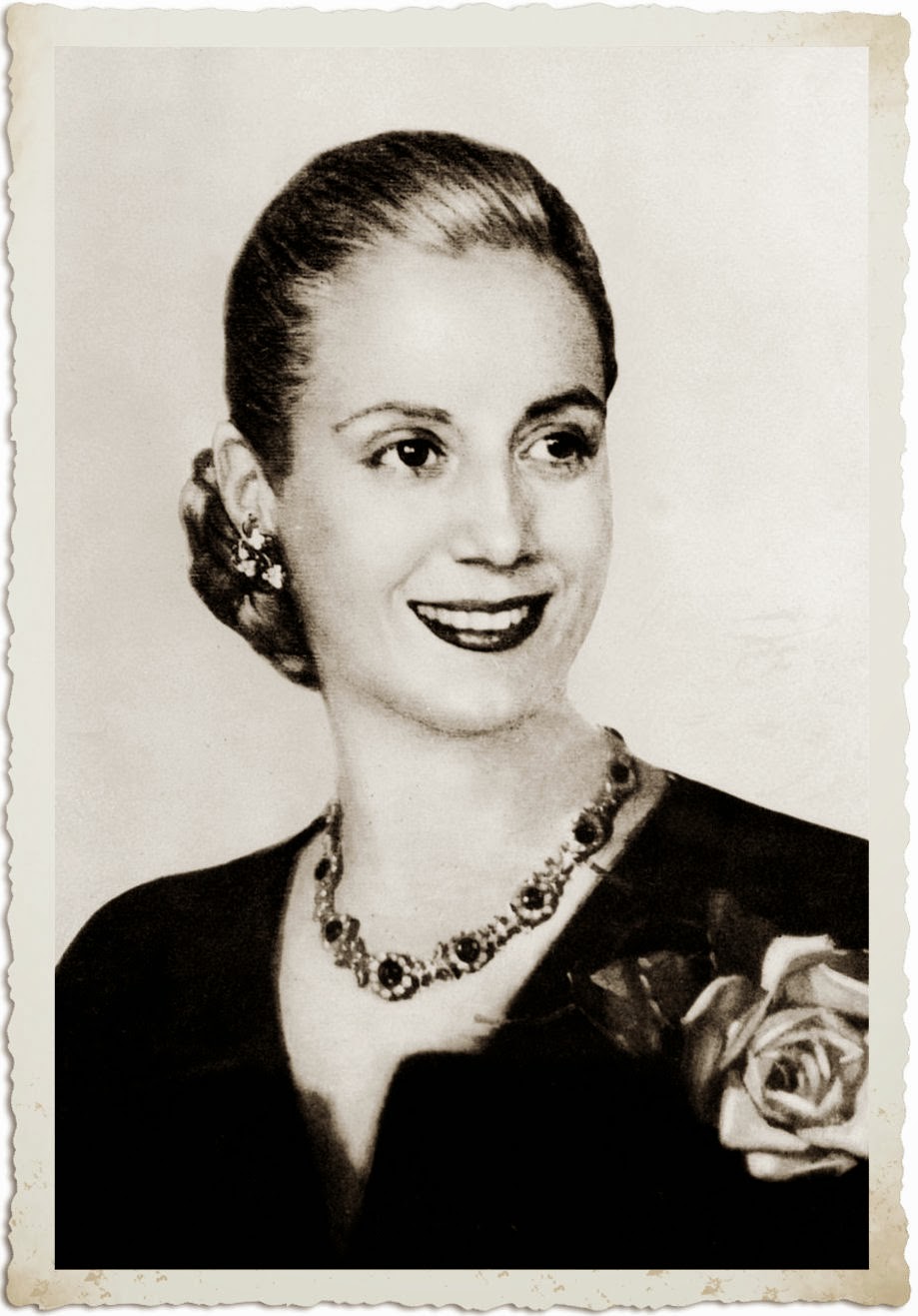 Eva Peron nee Duarte was born on the 7th May 1919, illegitimately into a large impoverished family.
At the age of 15 she left the countryside to become an actress in Buenos Aires and by the age of 26 she had married Col Juan Peron who then became President of Argentina and Eva became one of the most powerful women on earth. 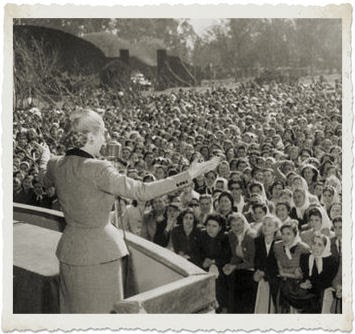 When her death was announced on all radio stations, shops closed, restaurants, bars and cinemas emptied and national mourning began.
A huge crowd gathered outside the presidential palace and eight people were killed in the crush, another 2,000 needed hospital treatment.

Eva left instructions that after her death, her hair was to be dyed her usual shade of blonde and for her usually red painted nails, to be to painted one last time in a clear varnish.
The embalmer was Dr. Pedro Ara who carried the perfectly preserved head of a peasant as a specimen of his work. Dr. Ara embalmed Evita only long enough for a public viewing, which stretched from a few days to a few weeks as the crowds kept pouring in.


A second embalming, to prepare it for her mausoleum, took two years and cost over $100,000 dollars. 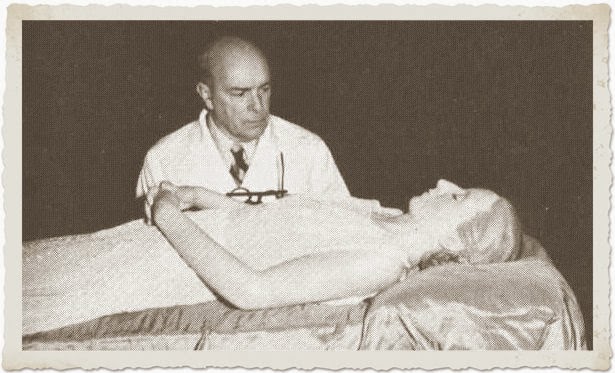 As the mass outpouring of grief for 'the Spiritual Leader of the Nation' continued around the state funeral, Eva was being prepared for public display in the capital Buenos Aires where more than two million people were to file past her open coffin.
While waiting for the monument to be constructed, Evita's embalmed body was displayed in her former office at the CGT building for almost two years.

Her body was to be placed in a mausoleum which would be bigger than the Statue of Liberty. But all the plans for a monument to Evita came to nothing when, in 1955, her husband President Juan Peron’s regime was overthrown by the military and the president fled to Spain.
Fearing Evita’s body would become a rallying point for the opposition, it was seized by the military in 1955. Eva's political opponents feared her grave would become a shrine and focus for revolt, so they planned to remove her body out of the country. 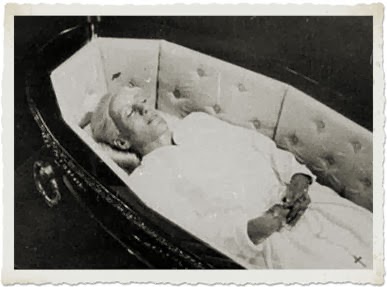 The army commandant charged with guarding the corpse refused to have it on his base.
Hidden in a wooden crate marked 'Radio Equipment' Eva's body was left in a van parked in Buenos Aires at the city’s waterworks. Then later behind a Cinema Screen and in the attic of Military Intelligence. Even in the home of an Army Major who is thought to have shot his wife when she became jealous of the time he was spending with Eva’s body.
But somehow, at every location the news leaked out and shrines of burning candles and flowers would appear. From 1955 until 1971, the military dictatorship of Argentina issued a ban on Peronism. It became illegal not only to possess pictures of Juan and Eva Perón even in one's home, but even to speak of their names. 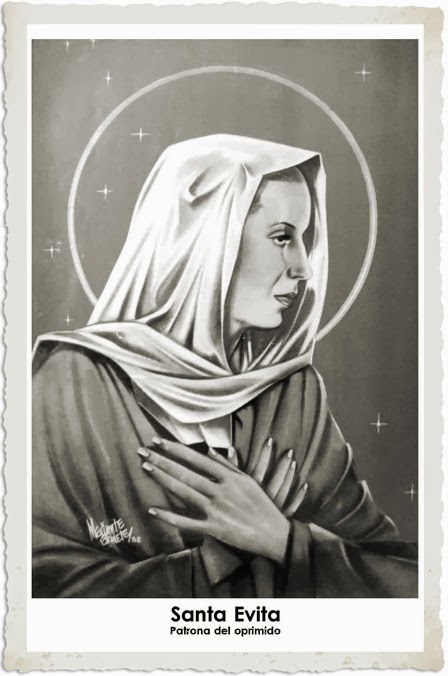 Dr Kraniauskas of the University of London says 'She represented welfare to the poor, so she was loved' and whilst the legend of Evita continued to grow around the world, Eva’s embalmed body was being shipped around the globe for two decades.

Eventually it was decided that nowhere in Argentina was safe enough to keep the body and in 1957 the military junta ordered it to be transported to Milan. With the covert assistance of the Vatican, the remains of Eva Peron were taken to Italy and buried in a Milan cemetery under the name Maria Maggi.

'Where is the body of Eva Peron?' asked graffiti that appeared in Buenos Aires. Her power as a symbol of resistance grew.
In 1970, the Montoneros ~ a Peronist guerrilla group ~ kidnapped and killed the former president, General Pedro Eugenio Aramburu. They targeted him partly because he had overseen the initial disappearance of Evita's body. The guerilla's refused to return Aramburu's corpse until Evita's body was returned to 'The People'. Aramburu left a sealed letter detailing her secret grave and Evita was returned, as was Aramburu's body. When the body arrived in Madrid, Peron and his third wife Isabel discovered that there was extensive damage to Eva's remains. A finger tip had been removed, due to the militarys attempts to identify whether this really was the actual body of Eva Peron and not just a wax copy. 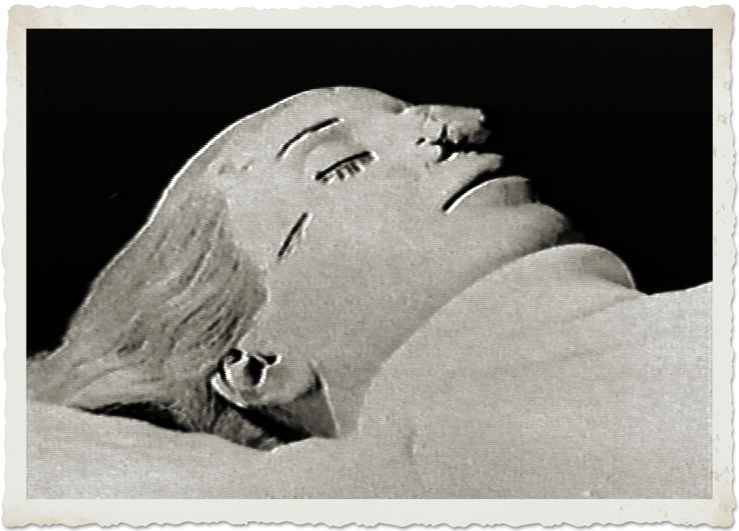 In 1974 Domingo Tellechea, a restorer of art, antiquities ~ and human remains, was the expert chosen to make the body of Eva Peron presentable for public display.
Eva's nose had been badly damaged and she appeared to have sustained cuts on her face and blows on her body, her feet were in very poor condition as she had been stored in a standing position in her unusual various resting places. 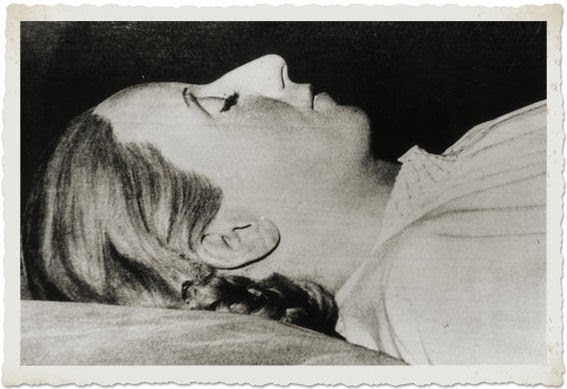 Peron kept the coffin containing Eva in their bedroom, but often placed it on display on a plinth next to the dining room table.

Juan Peron returned to power in 1973 but Eva did not come home until a year later when he died and was succeeded as president by Isabel.
Eva's body was once again briefly displayed to the public next to her husband's coffin. Photos from the time show a queue outside Los Olivos, but nothing like the two million people who had filed past her coffin when she died in 1952. Another military junta overthrew Isabel in 1976.
The remains of Eva Peron now lie in her families crypt, 5 metres deep under enough concrete to build a Nuclear Bunker, in the Recoleta Cemetery in Buenos Aires.

Posted by Taphophilia Catafalque at 23:39 No comments:


Listed amongst the Landmark buildings that 'Never Were', you would find London's Pyramid of Death.
In 1829, architect Thomas Willson planned a pyramid mausoleum to be located in Primrose Hill, North London. It would hold up to five million bodies because of the lack of burial space in the capital's churchyards. 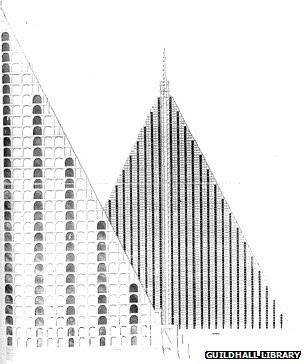 Willson, born in 1780 and trained at the Royal Academy, wanted the pyramid to be 94-storeys high and cover a site of 18 acres, (7000 sq m).
'It was supposed to be compact, hygienic and ornamental,' says Catharine Arnold, an expert on London's dead.
'Willson hoped people would come to admire this huge pyramid from far and wide, picnicking on Primrose Hill and enjoying this splendid monument. But it would be rather like a giant car-park of the dead,' says Arnold.
The pyramid-design caught the public's mood for Egyptiana - the height of fashion at the time. Winding walks, similar to today's Guggenheim Museum in New York, were planned to transport the bodies through the pyramid's catacombs to their final resting places.
Why didn't it happen?
'It would have been monumental, but grotesque - a literal Valhalla,' says author Simon Jenkins.
'Public opinion stopped it. The arguments for leaving the site wild won the day and Primrose Hill became one of London's most popular parks.'

Willson claimed the pyramid would cost £2,500 on completion and would make £10m profit when full, but there was suspicion among the authorities that his figures did not add up.
There was also concern that the weight of the bricks may have crushed Primrose Hill. And the public mood turned against necropolises - cities of the dead - as garden-style cemeteries became the norm.
With the building of Highgate cemetery in 1829, the pyramid scheme was finally shelved.

Thanks to BBC News for this information.


Posted by Taphophilia Catafalque at 09:59 No comments:

Amy Winehouse - Back To Black 23 July

A year ago today on the 23rd July 2011, we remember the sad passing of the esteemed singer~songwriter Amy Winehouse, who tragically died from alcohol poisoning, at the age of 27 years old.
Her distinctive contralto jazz vocals can be heard here in this video which has been set amongst the background of Abney Park Cemetery in London.
May she now have found the Peace that eluded her here.

Posted by Taphophilia Catafalque at 09:34 No comments: