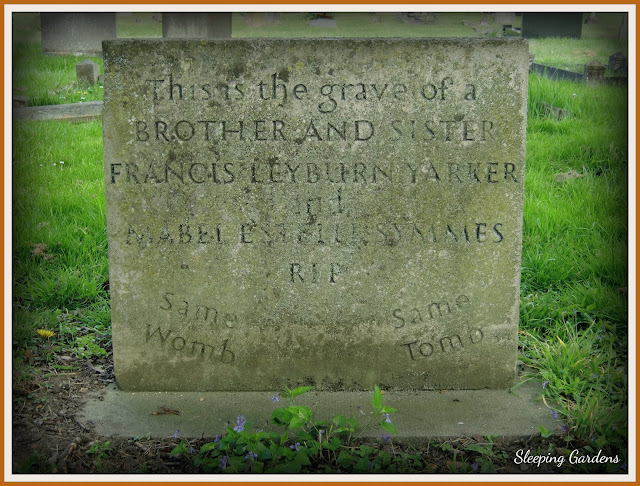 When I first saw this Epitaph, I couldn't help thinking that it was a little bit unsettling.

If they had not previously chosen to be buried together with this strange Epitaph,
I wonder who did choose it and why ?.

Posted by Taphophilia Catafalque at 21:59 No comments: 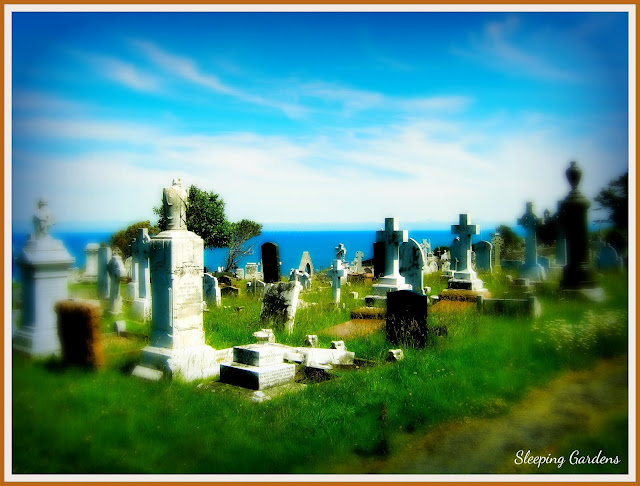 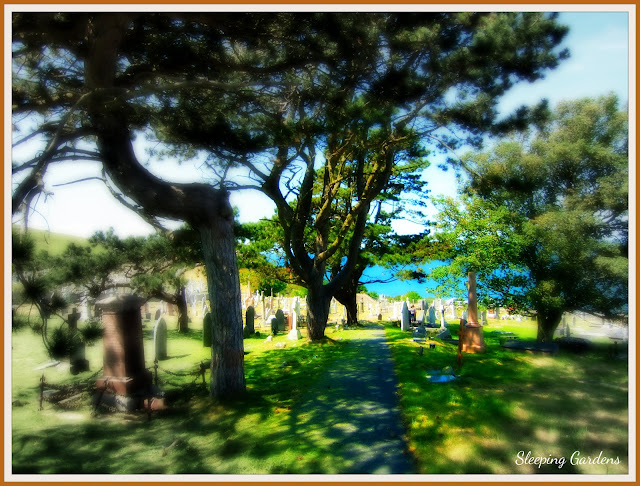 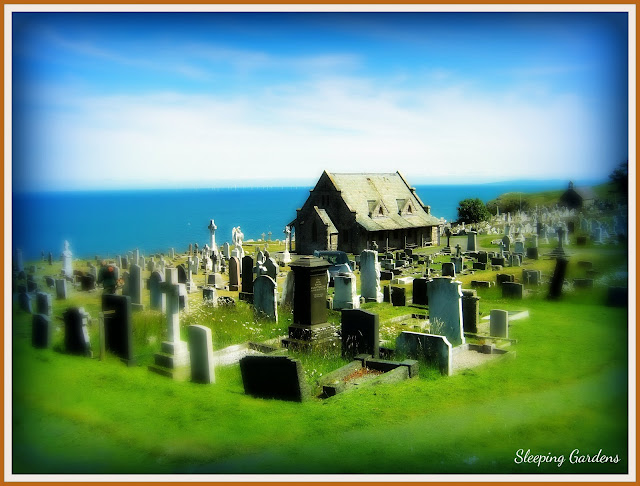 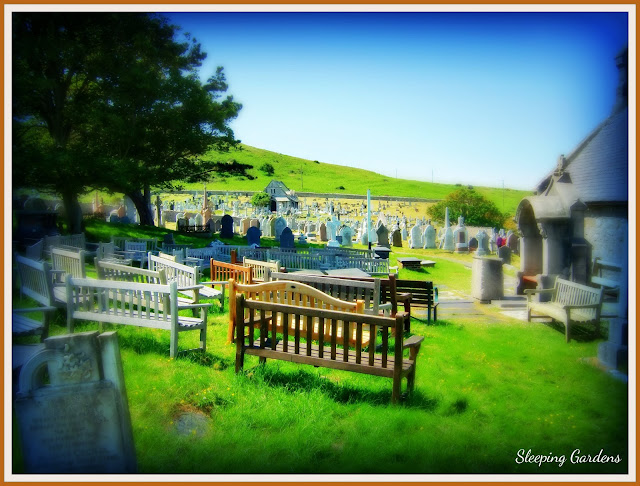 Posted by Taphophilia Catafalque at 11:21 No comments: 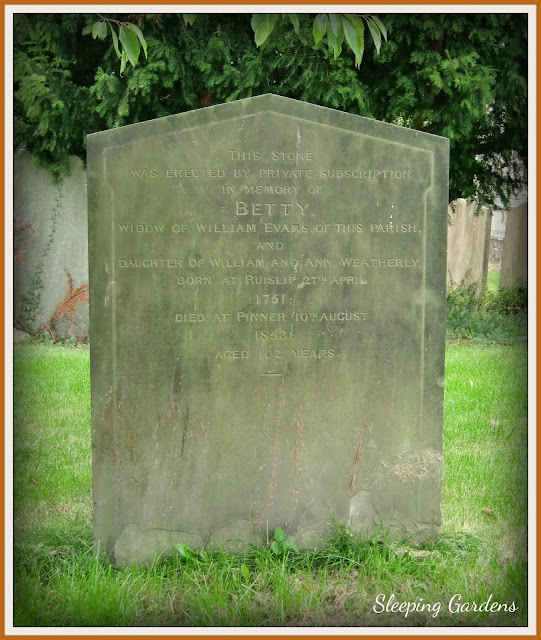 I could find no further information regarding Betty Evans or why this stone was erected by private subscription for her.
However there are three other centenarians buried in the Churchyard of St. John the Baptist in Pinner, Middlesex : William Kenelsby who died in 1775 aged 118 Years and of whom I wrote of in my previous post.
The others are Ann Winfield of Ruislip who died in 1851 aged 100 Years and Charles James who died in 1923 aged 102 Years. however I could not locate their burial sites in the churchyard.


Posted by Taphophilia Catafalque at 17:49 No comments: 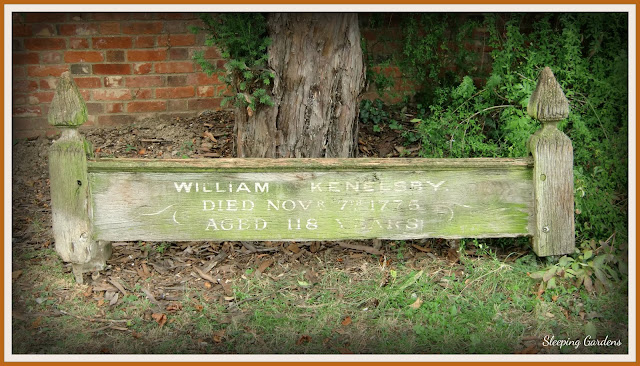 Willian Kenelsby was for many years a servant for Lord Henry Beauclerk's family. He retired from service in 1769 at the age of 112 years old.
His wooden headboard stands in the Churchyard of St. John the Baptist, Pinner, Middlesex.
I could find no further information on this gentleman, but only the following on Lord Henry Beauclerk whom he worked for.......

Lord Henry Beauclerk was born 11th August 1701 and was the fourth son of the first Duke of St. Albans, Hertfordshire.
Henry's first commission at the age of 16 was that of an Ensign in the 31st Foot.
Ten years later he became a Captain of the 3rd Foot and went on to become the Colonel of the 48th Regiment  at the age of 42.
He returned to his first Regiment two years later when King George II appointed him Colonel of the 31st Foot.
He retired from the Army after an argument with the Duke of Cumberland.

Lord Henry Beauclerk became a member of Parliament for Plymouth 1740 ~ 41 and for Thetford 1741 ~ 1761 on the interest of his kinsman the Duke of Grafton.
In 1759 Lady Beauclerk wrote to the Duke of Newcastle asking for financial assistance.
On the 5th January 1761 Henry Beauclerk died and his widow was granted a pension of £400 per year. Posted by Taphophilia Catafalque at 21:21 2 comments: 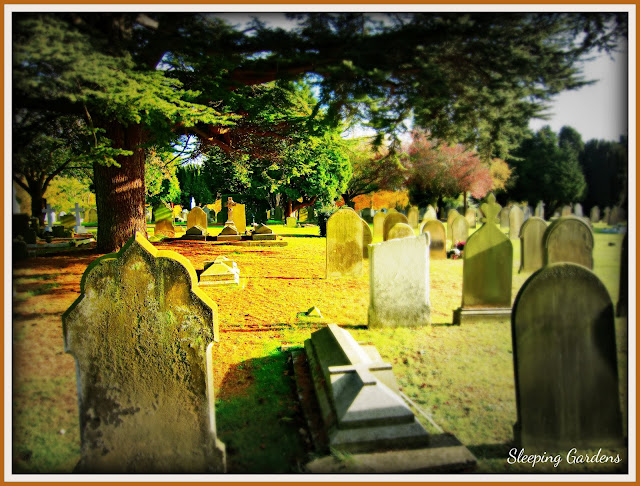 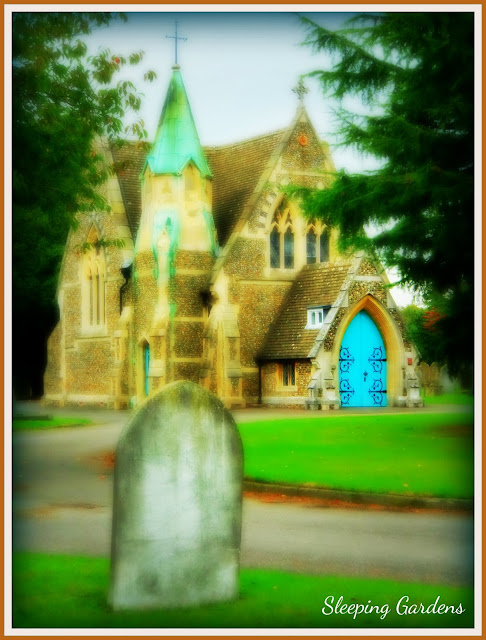 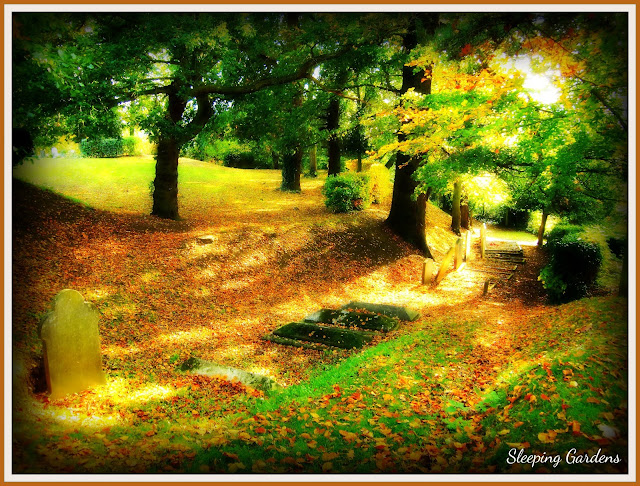 Posted by Taphophilia Catafalque at 02:06 No comments: 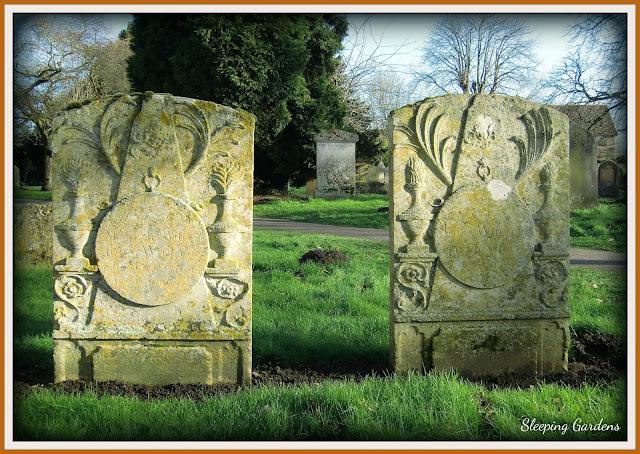 John Winston  ~  John Winston
Is the most legible name on both of these stones, but it looks as though another name beginning with the letter 'M' appears above it on the left, all other information on these stones is not fully legible 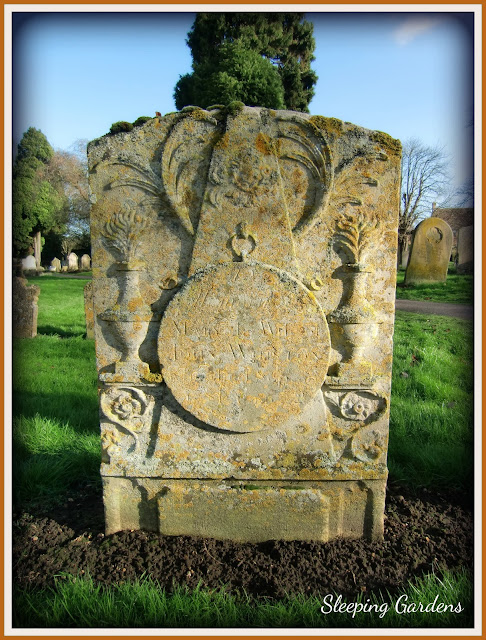 On first appearances the inscriptions on these headstones look as though they could be easily read, but the lichen has made it almost impossible.
I believe these headstones to be in a Regency Style and whilst I have seen others of this period with flaming urns and obelisks, I have not seen them carved in such deep relief and in so much detail. I especially like the round name plate which appears to be hanging on the obelisk, shame it's not now legible.
The name Mr. John Winston appears on both headstones, but as is often the practice, a husbands name may appear larger than that of his wife's, even when it is her monument. Mr. Winston must have been a wealthy man, as these monuments are grandly embellished and also because they are quite close to the church door ~ prime location was more desirable and so came at a higher cost. 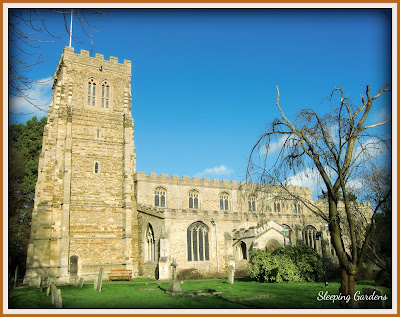 
Posted by Taphophilia Catafalque at 14:12 No comments: 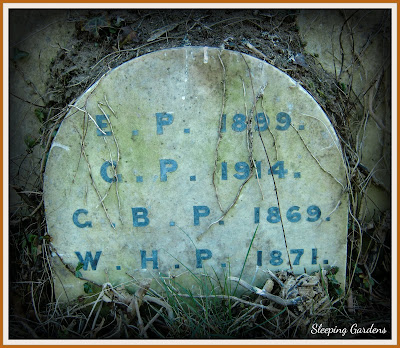 There are many little Victorian infant's graves to be seen when visiting Churchyards and Cemeteries and it is easy to make the mistake of linking these deaths to the usual suspects.
A lack of immunisations against childhood diseases that had yet to be understood and no awareness of the potential and often fatal dangers of the things children were readily given.
The statistics show that approximately only half of all living babies born, survived until their 1st Birthday. Then only 2 out of 10 babies actually managed to reach their 2nd Birthdays. 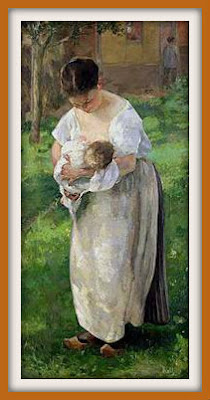 This was mainly due to poor standards of general sanitation and the understanding of the requirements of hygiene was very poor.
Those that were breastfed stood the best chances of survival, but the Victorian fashion for wearing such tight corsetry that required assistance to put on and remove, made the concept of natural feeding a totally impractical one.
Queen Victoria hired wet nurses for her children ~ she did not want to ruin her own figure and these matronly shaped women would do the job for a fee ~ if such a luxury could be afforded then wet nurses were employed. 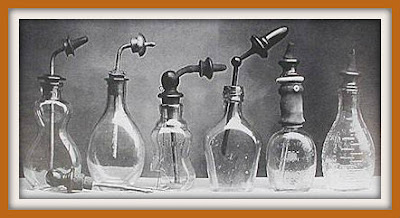 At a far more affordable cost was the very popular Babies Bottle. These were given wholesome patriotic names such as 'The Empire' and 'The National'. In the 1880's the popular Princess of Wales had one named in her honour 'The Alexandria' and 'The Princess'.

The glass bottle was fitted with an internal straw that had a rubber tube attached to a bone mouth shield and rubber sucking teat.
The appeal of these bottles was due to the baby being able to feed itself, as the bottle could be stood unattended beside them.
Who would have believed that these feeding devices, with names such as 'My Little Pet' and 'Mummies Darling' could possibly have been the cause of so many Infant deaths. 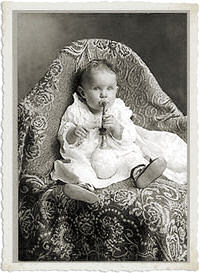 The problem arose over the cleaning of these bottles and even though they were sold with a brush, they were virtually impossible to clean. In her book of 'Household Management, Mrs Beeton stated that a new teat could be replaced every three weeks without needing any further attention.
This lack of sterilisation caused the build up of bacteria that ultimately lead to bouts of diarrhoea, this caused severe dehydration and death could follow in as little as 48 hours. 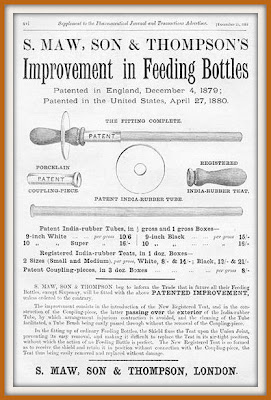 The latter day names for these bottles, such as 'The Killer' and 'The Murderer' soon became more appropriate and were now being condemed by the medical profession, but they still continued to sell well into the 1920's.
With time things improved and these 'Deadly Bottles' were replaced by the easier to clean 'Banana Bottle'. 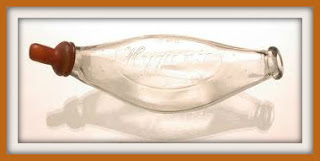 For more information click on this link babybottle museum

Posted by Taphophilia Catafalque at 02:07 7 comments: 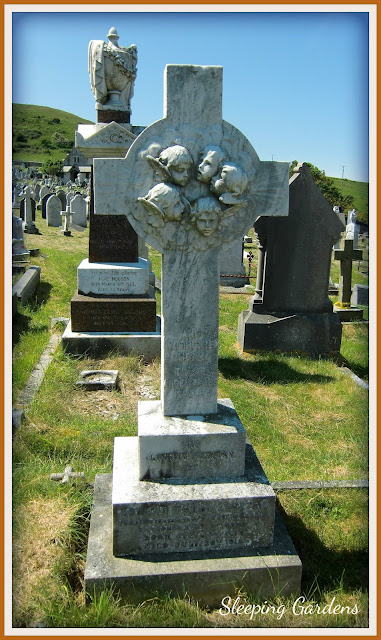 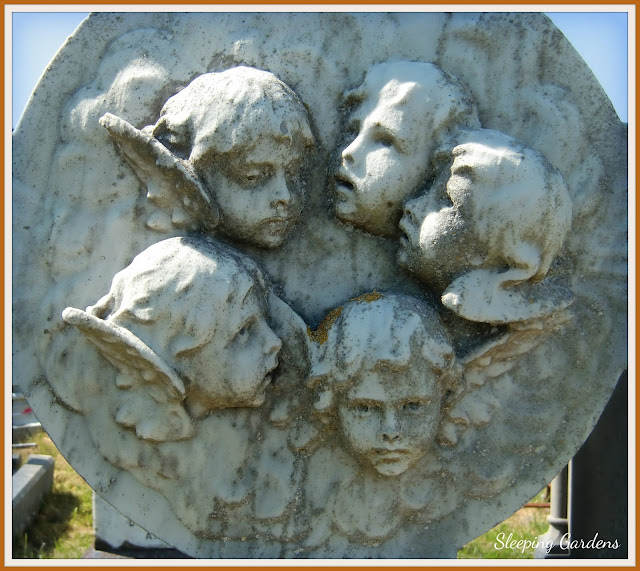 When I saw Laurie's recent post at Graveyard Detective I recognised it and straight away I knew that I had a  photograph very similar to his one.
So just like playing the children's card game of 'Snap' here is my offering.
However I think that I can 'trump' yours Laurie with my five cherubs to your three..... 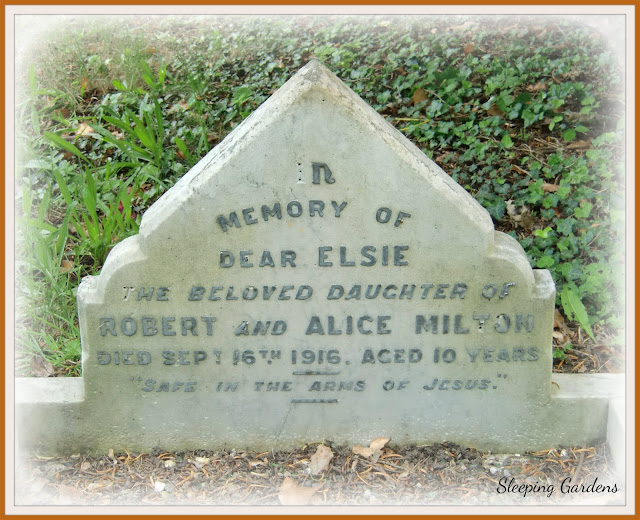 In
Memory of
Dear Elsie
The Beloved Daughter of
Robert and Alice Milton
Died Sept. 16th 1916 Aged 10 Years
'Safe In The Arms of Jesus'