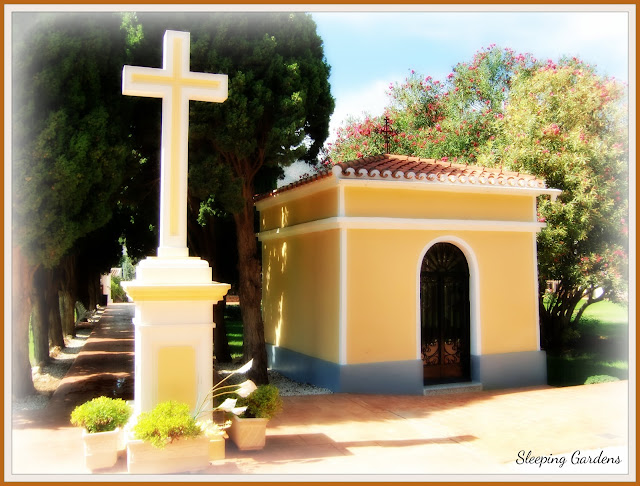 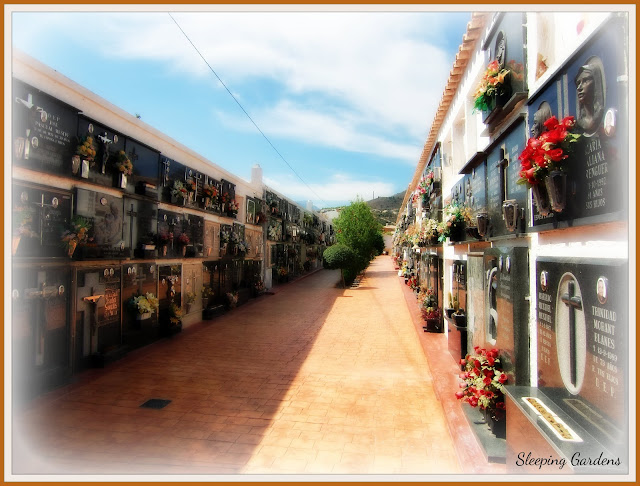 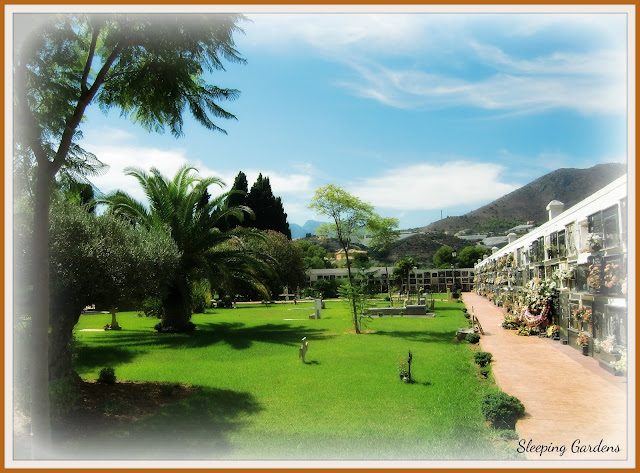 Posted by Taphophilia Catafalque at 19:28 4 comments: 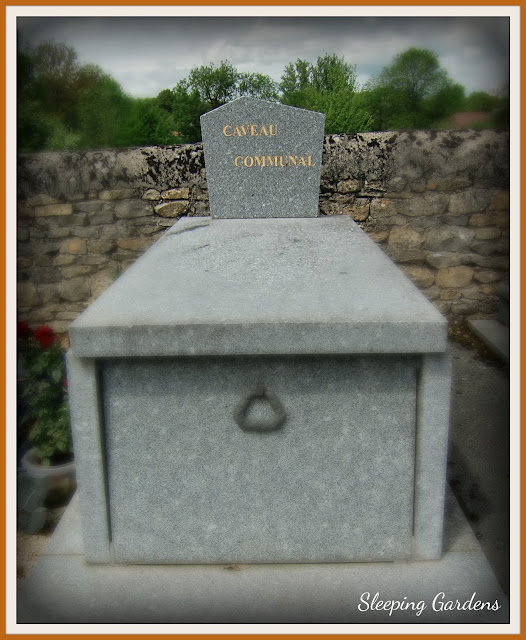 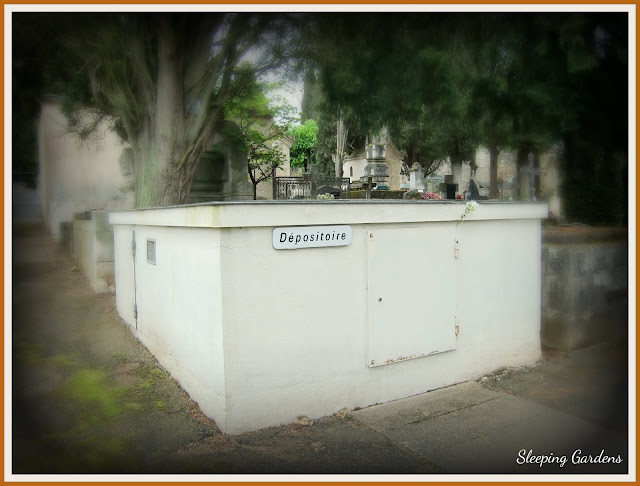 The following information comes from Condoleances.com a very helpful French website that sells floral tributes, but also gives information on everything else you need to know about French Funeral Customs
Translated by Google and slightly edited by me..

Temporary Homes for Coffins: The Depository disappears in favour of the Temporary Vault.
In 2011, the National Assembly decided to outlaw the use of cemetery mortuaries, those locations which are above ground level for hosting coffins pending transfer to a permanent home. Now only temporary vaults will receive coffins.
When a new vault has not been completed or no box at the columbarium is available, it is possible to place a coffin for a limited time in a Temporary Communal Vault in a cemetery.This action may be taken pending a final burial or cremation.

By Article R2213~29CGCT the members of parliament decided to eliminate the use of temporary morgues as destinations for coffins in order to avoid violations of safety standards. These Temporary Communal Vaults are legally required to be located within the cemetery.
The temporary vault is intended to accomodate a coffin before final burial and must be able to follow certain rules of decency and safety, including a reasonable sense of welcome. Moreover, it must provide adequate protection against any external damage such as severe weather conditions or voluntary degradation. The law requires the temporary vault to be equipped with a mechanism for closing the coffin away without any accident.
The period of storage within a temporary vault cannot exceed a period of six months. After this time and in the absence of any opposition, the town will be able to proceed with the burial or cremation of the deceased. The use of temporary vaults may be available free of charge in some towns.

Posted by Taphophilia Catafalque at 16:22 No comments: 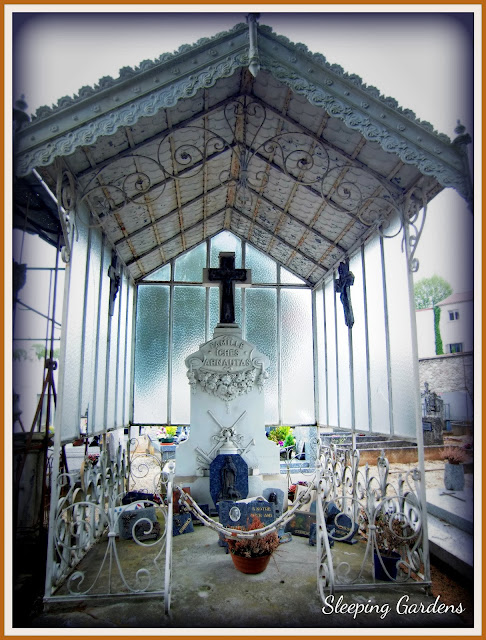 The canopies that cover and protect the tombs in Cahors Cemetery ~ France, are perhaps a more affordable option than the more expensive brick built mausoleums that they stand side by side with.
Although I have to admit that at first glance, they reminded me of garden greenhouses and this one was no exception. However on closer inspection I noticed the rake and spade and watering can, the fruit and vegetables and abundance of flowers. I wonder if the medal had anything to do with this obvious passion for gardening ? 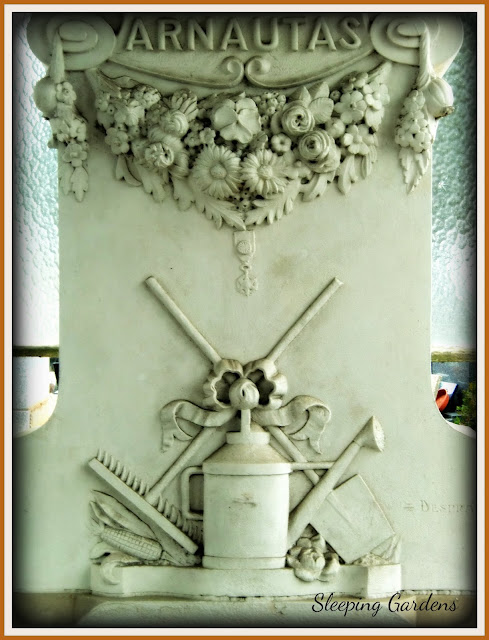 Posted by Taphophilia Catafalque at 01:13 3 comments: 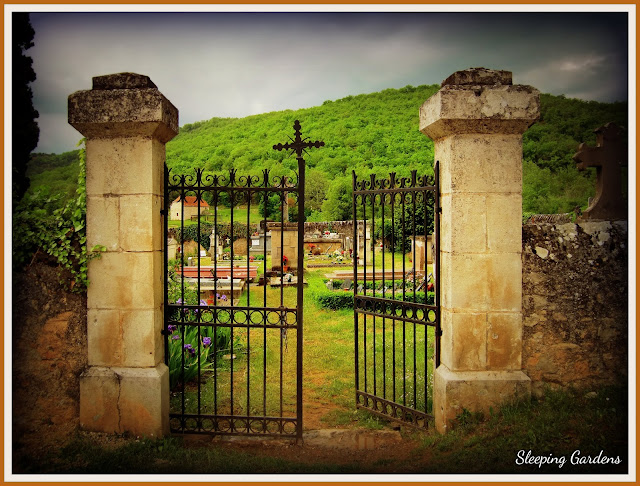 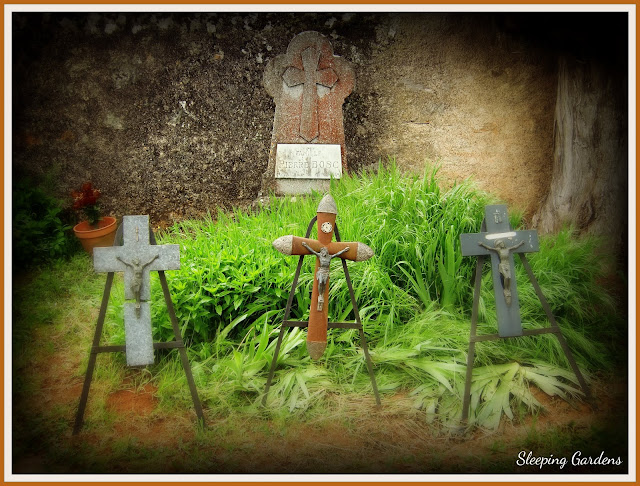 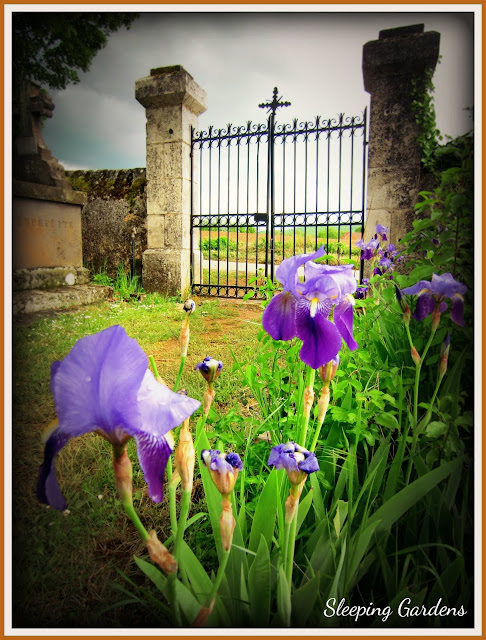 Posted by Taphophilia Catafalque at 00:32 No comments: 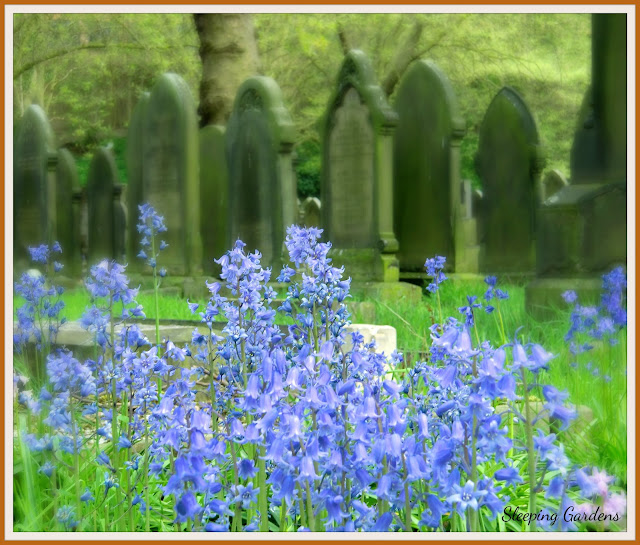 Bluebells are a symbol of humility, gratitude, constancy and ever~lasting love. Bluebells are also associated with the Fairy Realm and when the flowers 'bells' are rung, this would call the wee folk to come together.
Another name for Bluebells is 'Dead Man's Bells' due to the belief that the fairies were thought to cast spells on those who picked or trod on them.
In Scotland they are widely known as 'Harebells' where it is believed that Witches would shape~shift into Hares and hide amongst the flowers.

Bluebells love partial shade and for this reason they are found in wooded areas. The dappled sunlight that filters down through the mature trees of Key Hill Cemetery in Birmingham, provides exactly the right setting for them to flourish all over the graves there. 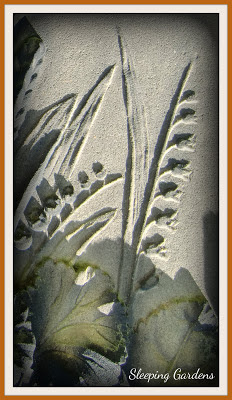 Although when carved in stone the Bluebell is similar in appearance to the Lily~of~the~Valley, it's the narrow leaf and slimmer shaped bell that defines it here.

Posted by Taphophilia Catafalque at 13:15 3 comments: 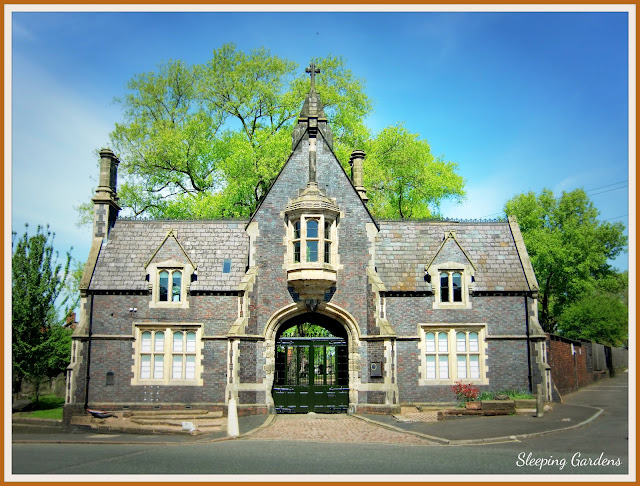 Warstone Lane Cemetery was owned by the Church of England Cemetery Company and was opened in 1848 for Anglicans and Nonconformists and is located in the City's Jewellery Quarter. It was acquired by the Birmingham City Council under a compulsory purchase order in 1951.
The Cemetery lodge which is built from Staffordshire Blue Stone is a Grade II listed building and are now privately owned offices.
The cemetery's name and several of the surrounding streets, comes from the 'War Stone' that was deposited by a glacier during the Ice Age and which served as a Parish boundary marker. However the cemetery has also been known by other names, such as Brookfields Cemetery and The Mint Cemetery, due to it's close proximity to the coin producing 'Mint'  nearby. 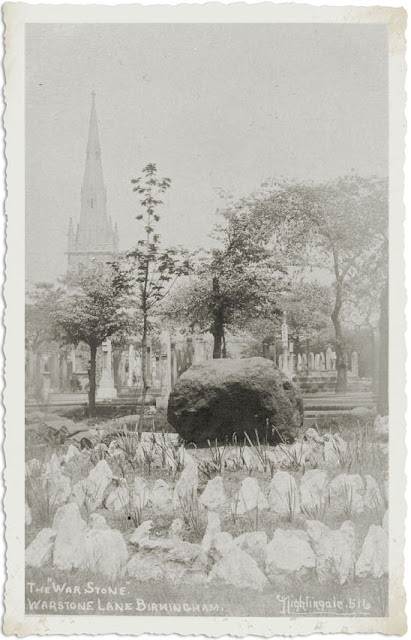 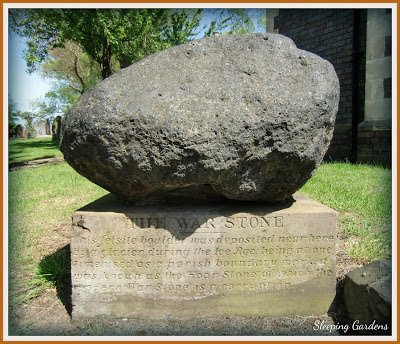 The War Stone
This felsite boulder was deposited near here
by a glacier during the Ice Age: being at one
time used as a parish boundary mark, it
was known as the 'Hoar Stone' of which the
modern War Stone is a corruption. 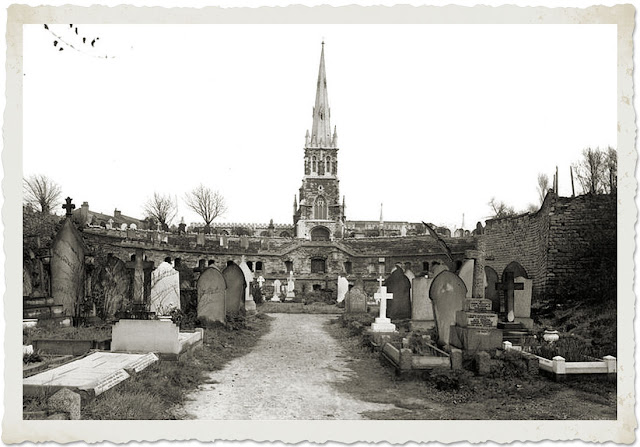 The cemetery's memorial chapel of St.Michael's was used for worship from 1854 to 1878. The chapel stood above the semi~circular rows of catacombs, which made use of the features of the site after it had previously been used as a sandpit quarry.
Coffins were lowered from the chapel above down into the catacombs below by way of a  catafalque.
In 1846 the Birmingham Cemeteries Act required all coffins interred within the catacombs to be sealed with lead or pitch, due to the 'Unhealthy vapours and unpleasant smell emanating from them'.
The catacombs which had previously been accessible when vacant, have now all been sealed due to becoming the unsavoury haunt of drug users and rent boys. 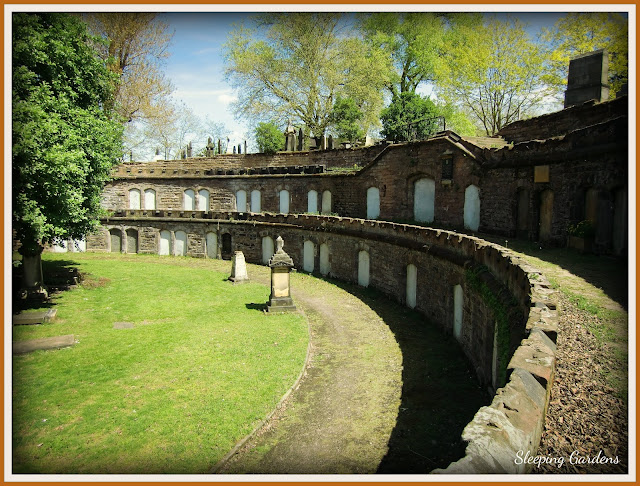 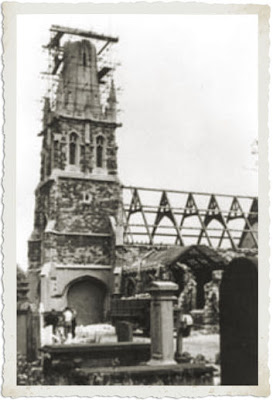 Sadly the church fell into disuse and was demolished in 1953. 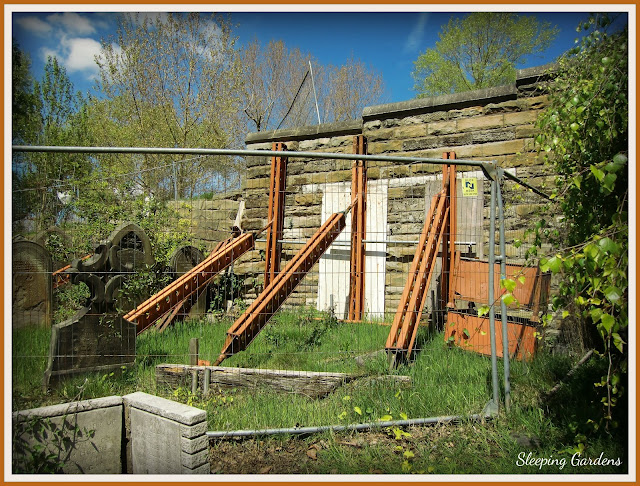 The retaining walls of the catacombs require additional support until further work can be undertaken to strengthen them. 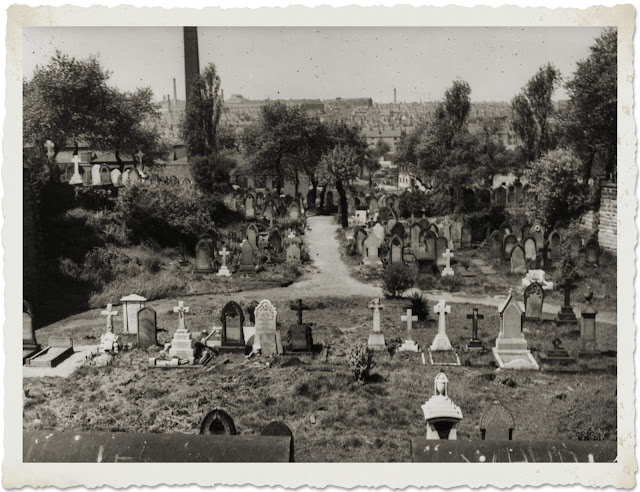 Although the cemetery is no longer open for new burials here are some of the Notable people interred in Warstone Lane : 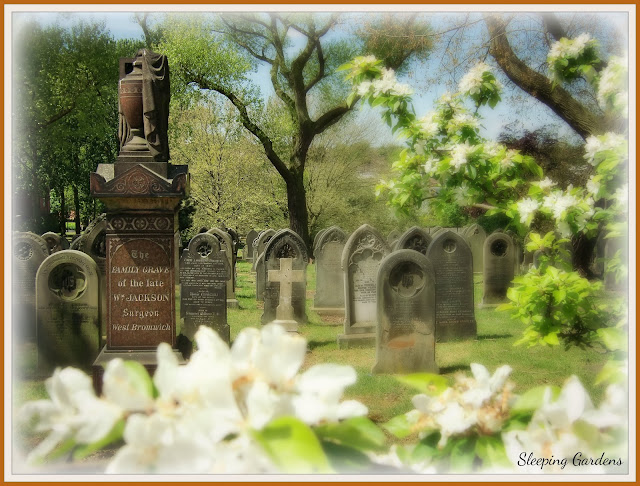 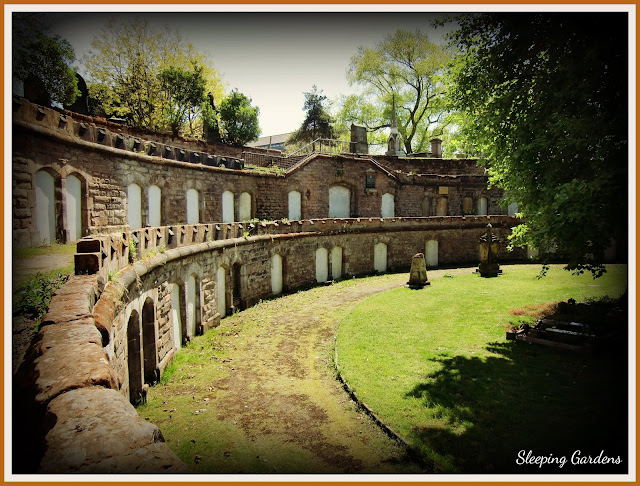 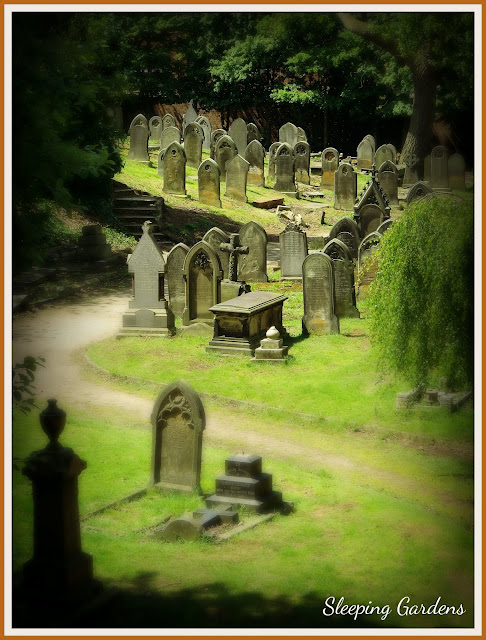 Posted by Taphophilia Catafalque at 03:18 2 comments: