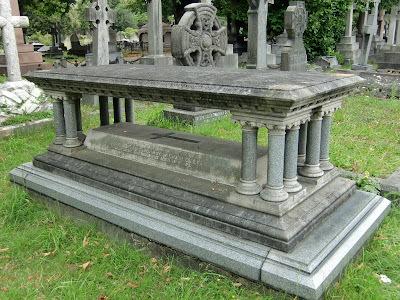 Brompton Cemetery, London
Table tombs usually consist of a flat stone onto which the details of the departed are often inscribed. This is supported on four or more legs or supports similar to the first picture above.
Also a sarcophagus may be found underneath the table top. 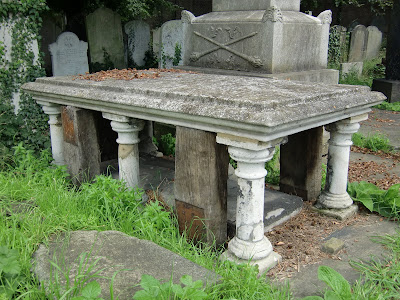 Brompton Cemetery, London
﻿
Posted by Taphophilia Catafalque at 11:48 No comments:

This monument in the Zorgvlied cemetery, is dedicated to every beloved
Father and Grandfather.... 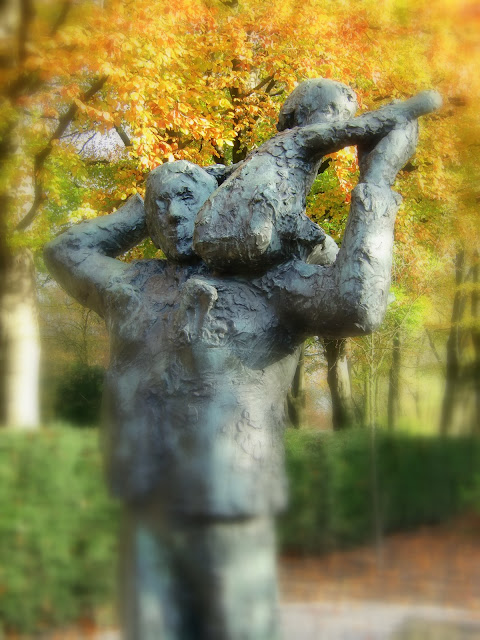 Posted by Taphophilia Catafalque at 11:39 No comments:

The symbolism of Curtains or Drapes, represents the divide between the world of the living and that of the next, as in the saying ~ Beyond the Veil. Whilst the purpose of a curtain may be that of concealment, it may also be used as a form of protection.
The veil that covered the Ark of the Covenant, was intended to protect mortals from its radiance.
I had not seen such good examples of Curtains until I found these two similar examples.
Surprisingly I found them on the same day, the first one in Wales and the other in England. 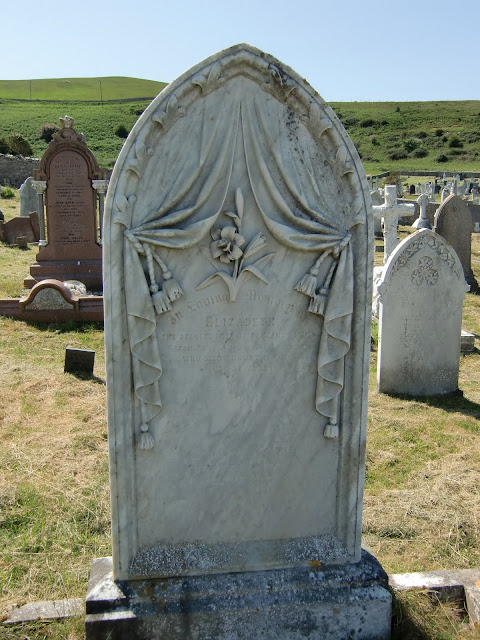 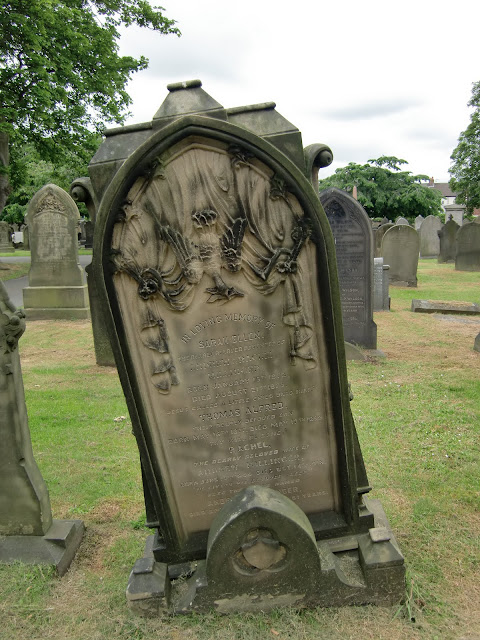 I am celebrating my First Year of blogging 'Sleeping Gardens' and I wondered what I should post for such a momentous ocassion as this ?
﻿ 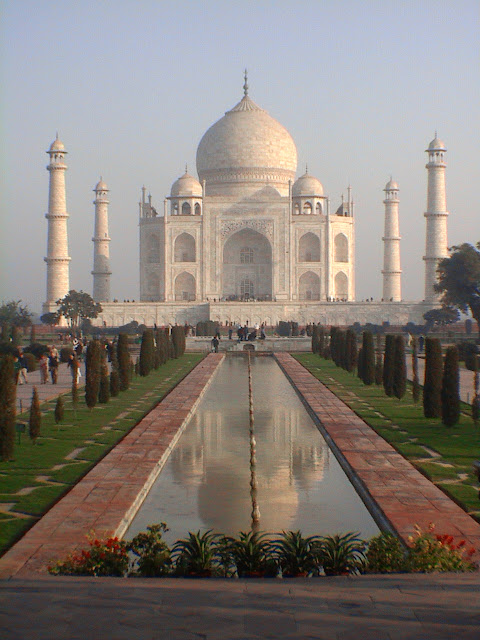 So I thought I'd pull out all the stops and go for a big one. The Taj Mahal seemed to be the most magnificent mausoleum I could think of and far to ostentatious for just an ordinary posting. 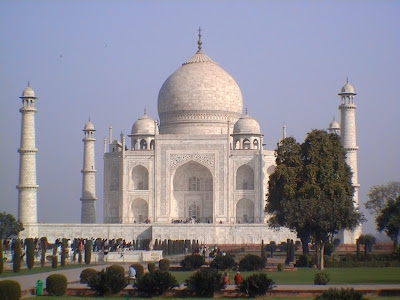 We have visited the Taj Mahal twice, the first time was on a whistle~stop tour of India, where we shuffled around with the crowds, had photos taken and left. Our second visit allowed us the opportunity to arrive early before the hoards descended and drink in the beautiful calm atmosphere of this amazing tribute to the loss of a beloved........ 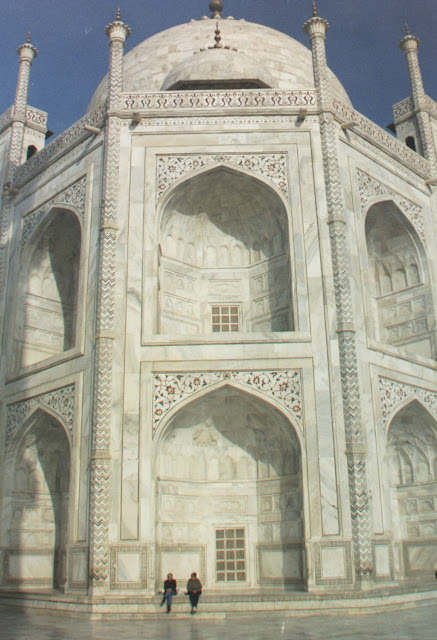 It was built by Mughal emperor Shah Jahan in memory of his third wife, Mumtaz Mahal. It is widely considered as one of the most beautiful buildings in the world and stands as a symbol of eternal love. 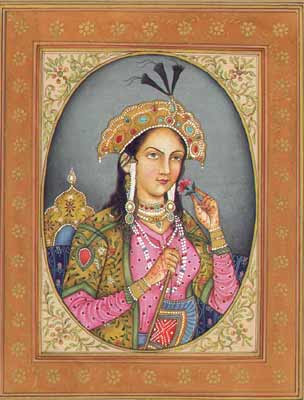 
Posted by Taphophilia Catafalque at 10:32 2 comments: 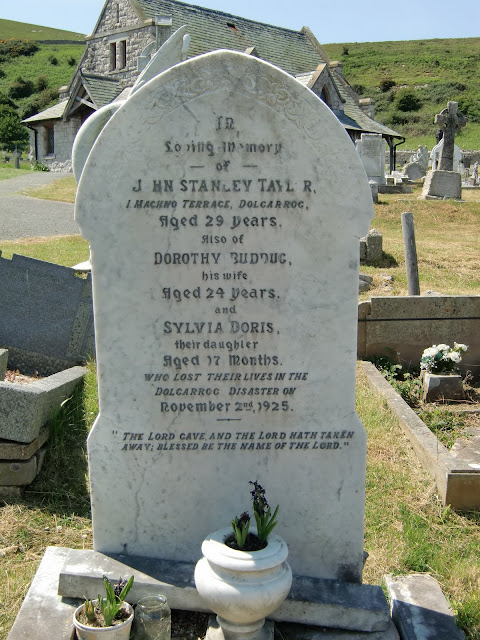 In Loving Memory of
John Stanley Taylor
1 Machno Terrace, Dolgarrog
Aged 29 years
also of
Dorothy Buddug
his wife
Aged 24 years
and
Sylvia Doris
their daughter
Aged 17 months
who lost their lives in the
Dolgarrog Disaster on
November 2nd 1925
The Lord gave and the Lord hath taken away
Blessed be the name of the Lord
On the night of the 2nd of November 1925, the failure of two dams caused a flood that swamped the village of Dolgarrog, killing 16 people. Many more villagers could have been killed had they not been in the local theatre watching a film that night.
The disaster was started by the failure of the Eigiau Dam, a gravity dam owned by the Aluminium Corporation.

The water released from the reservoir flooded downstream, and overtopped the Coedty Dam, an embankment dam. This dam also subsequently failed, releasing the huge volume of water that flooded Dolgarrog. 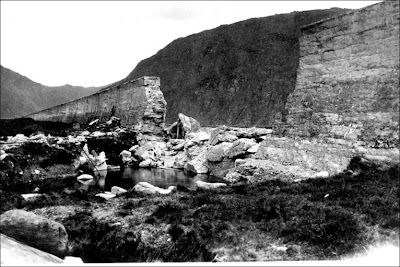 The disaster at Dolgarrog led the British parliament to pass the Reservoirs ~ Safety Provisions ~ Act in 1930 that introduced laws on the safety of reservoirs. This has since been updated, and the current one is the Reservoirs Act, 1975. 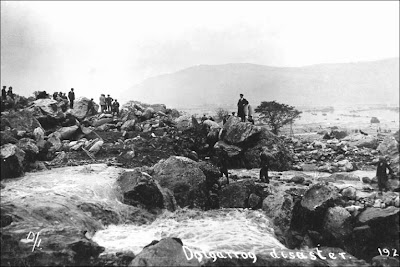 In 2004 a £60,000 memorial trail was created, explaining the tragic story to walkers. The trail takes visitors to where the boulders from the damaged dam reside. The project was opened by the last survivor of the dam disaster, Fred Brown, who on that night lost his mother and his younger sister. 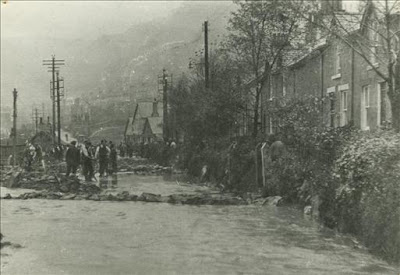 Click the bold type link below to see archive footage of the disaster
Film of Dolgarrog Disaster
Posted by Taphophilia Catafalque at 09:42 No comments: 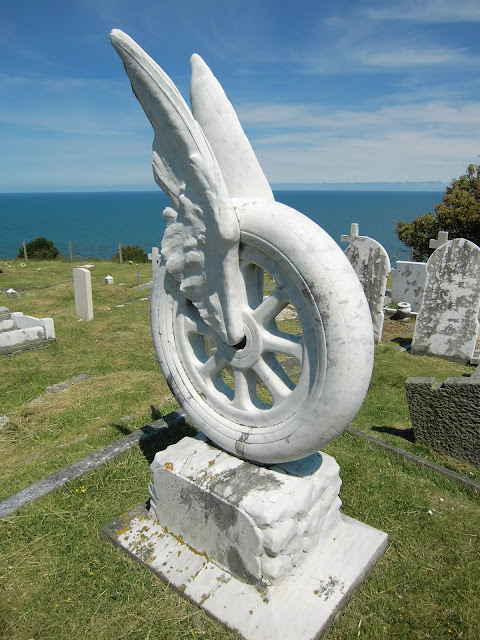 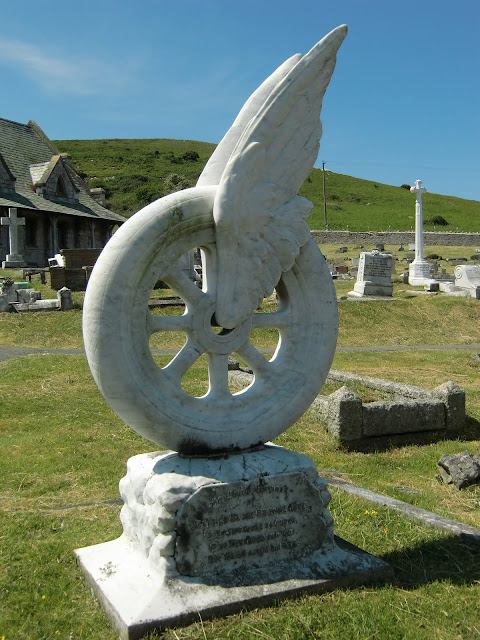 Beatrice ~ Bee ~ was born in Middlesbrough, Yorkshire and died in
Delamere, Penmaenmawr at the age of 34 years old.
Beatrice became a maverick of her time, when she drove a Singer 10hp car up the Old Road on the Great Orme circa 1911. It drew the attention of the press and onlookers, who wondered whether she would make it. 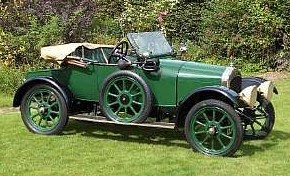 It may have been this, that drew the attention of George Wilkins Browne.
In December 1920, he became the first person to drive a car both up and down Snowdon. He drove up and down the railway track in an Angus Sanderson 14hp car. This event was filmed for cinema audiences. The ascent took 1 hour 22 mins, the descent 1 hour 5 mins.


The link below shows a Pathe Film of the event at the same time.
Driving up Snowdon in the 1920's

In 1920, Beatrice Blore changed her name by deed poll and added the surname of Browne. Her death in November 1921 at the early age of 34, was due to cancer of the liver and breast, which she had been been suffering from for the previous two years.
Her unique gravestone has kept her memory alive, a reminder of a woman keen to push the boundaries of what it was considered acceptable for women to do.


Posted by Taphophilia Catafalque at 17:59 3 comments: 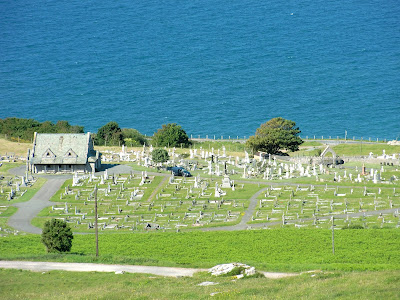 The cemetery on the Great Orme, Llandudno, Wales and the adjoining churchyard of St. Tudno are well worthy of a mention in 'Cemeteries of the World', if for no other reason than 'Location, Location, Location'.
And a few really interesting finds...... 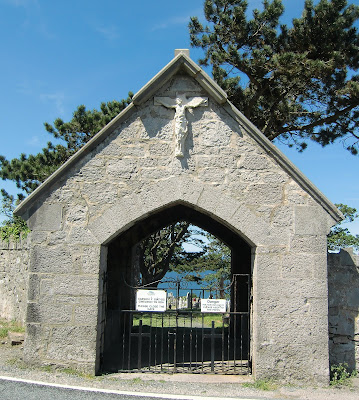 St.Tudno ~ pronounced Tidno ~ was a 6th century Celtic Monk, who climbed the Welsh, windswept headland of the Great Orme, to spread the message of Christianity and this place has been an active site of worship ever since. 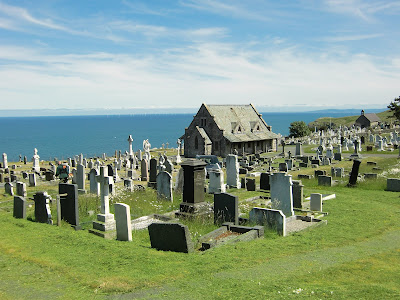 Open air services are held on Sundays from the end of May until the end of September. 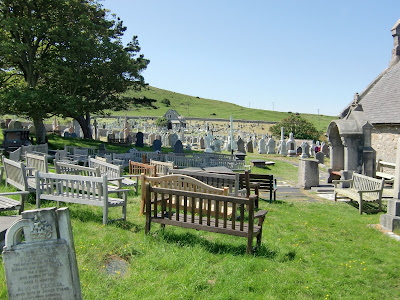 The outdoor pulpit stands on some very large plate tombstones, so often seen in the aisles of English Churches.
After discovering this place last year whilst on holiday, my parents said they knew
I would just love this cemetery and so we arranged a family day out 'graveyard stomping' ~ a term I have adopted from Corin White's blog Adventures of a Gravestomper. The already sloping and uneven ground of this cemetery, makes nagivating between the stones all the more challenging and so you really have to watch where you tread.We noticed what appeared to be quite a few other people looking around this interesting place ~ cemetery tourists ~ rather than the usual visitor, who comes to see a loved one.

I shall be posting some of my finds in the very near future, so watch this space.......
Posted by Taphophilia Catafalque at 10:13 No comments: