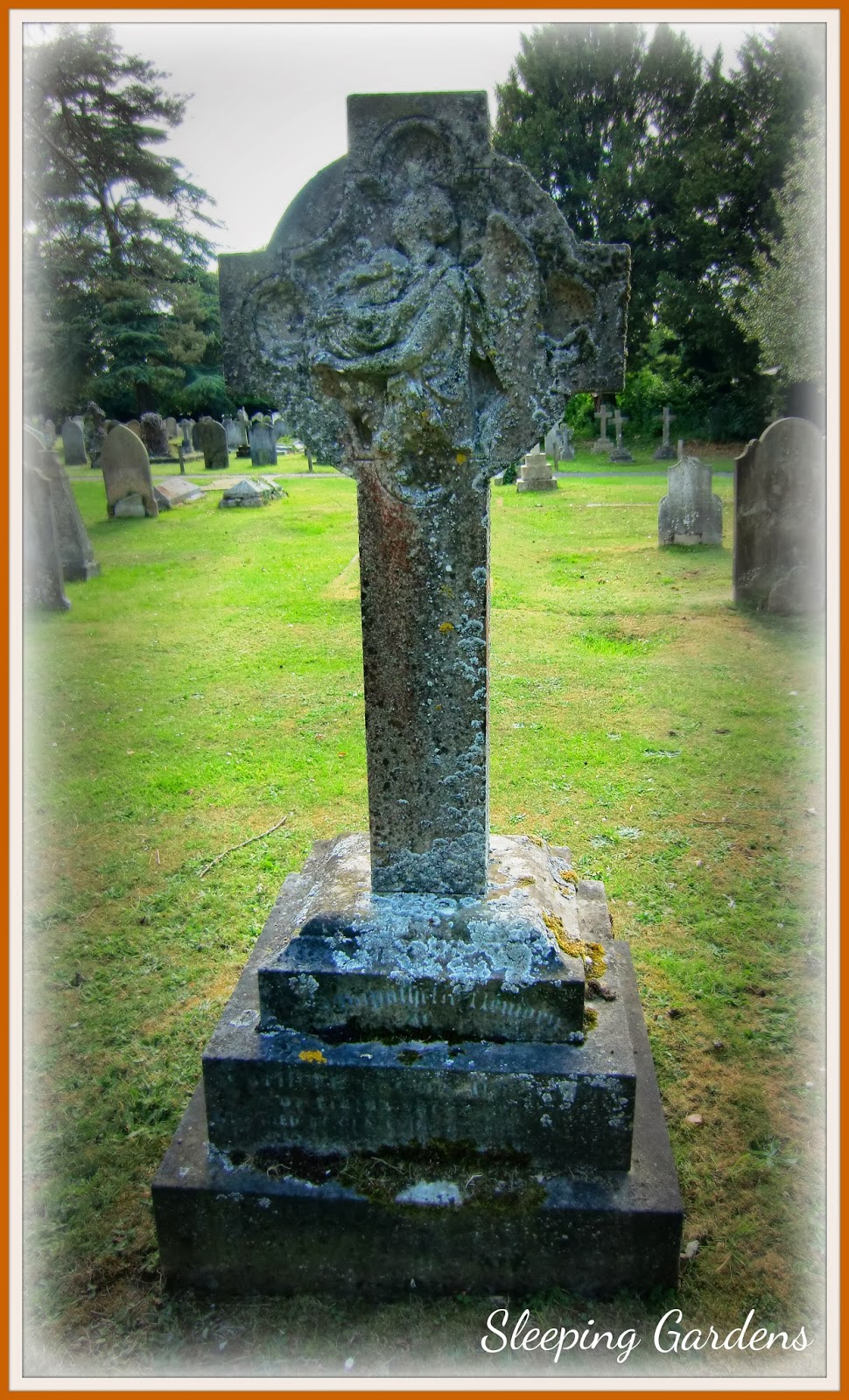 The inscription on the memorial above reads as:
‘In sympathetic memory of Camille Cecile Holland, of Maida Vale, London, who died at Clavering under distressing circumstances on the 19th May, 1899, aged 56 years.’ 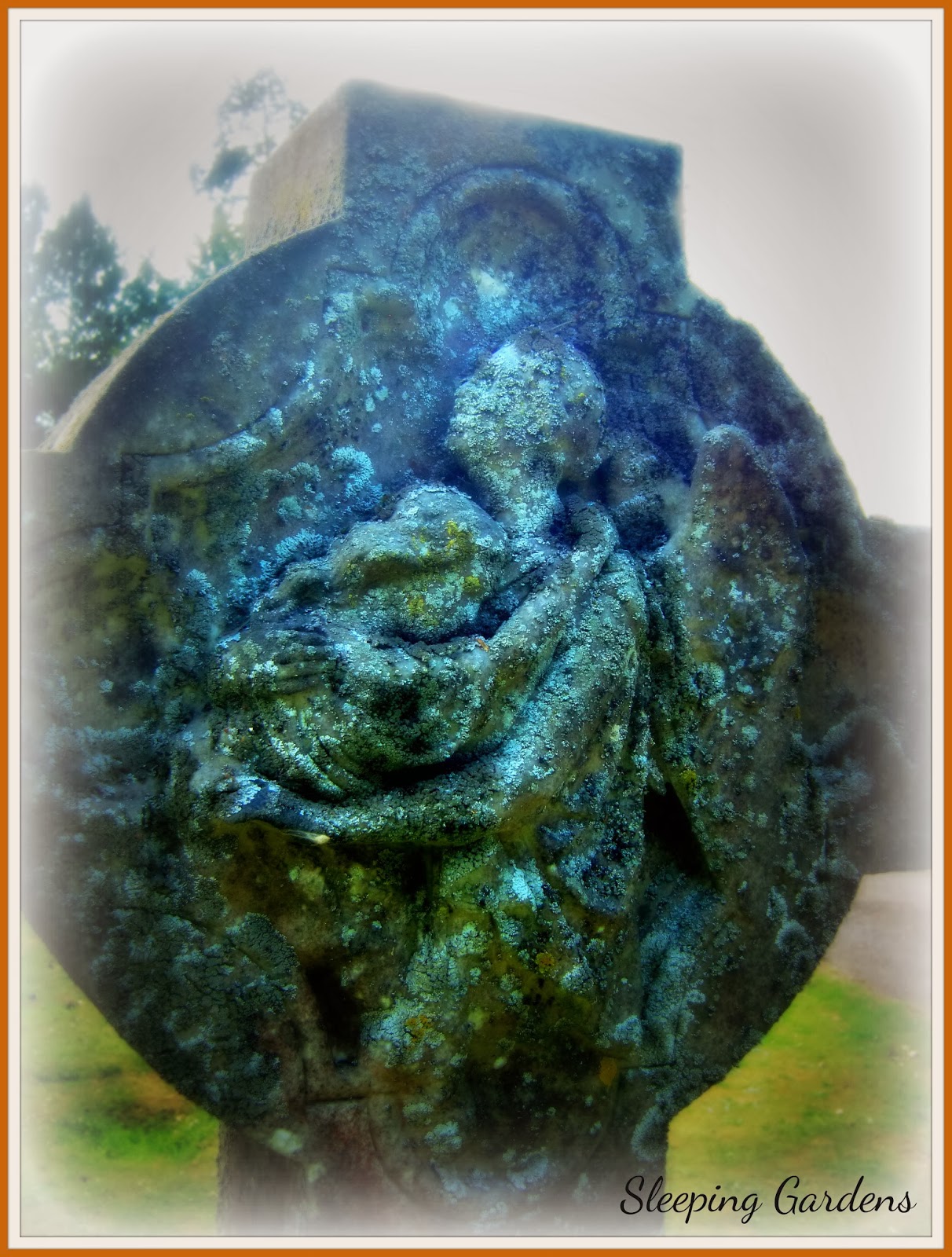 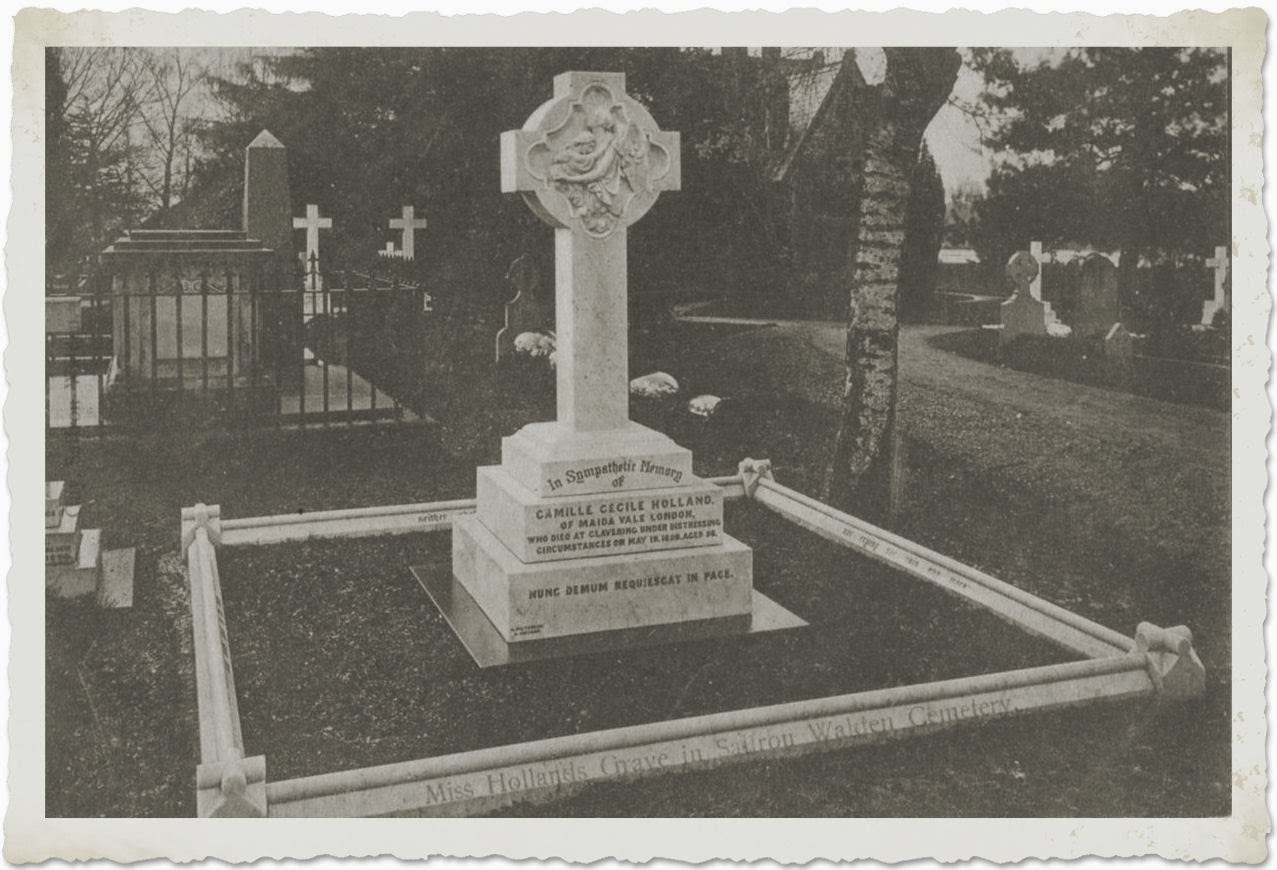 As the grave used to appear. 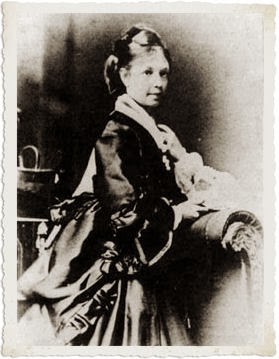 The distressing circumstances of which Miss Holland's memorial speak, were due to one Samuel Herbert Dougal, who had shot Camille at close range and then dumped her body in a ditch on Moat Farm where the unmarried couple had lived. However, Camille's body and indeed her murder were not discovered until some 4 years later, as a result of Dougal being found guilty of fraudulently forging a cheque in Miss Holland's name. 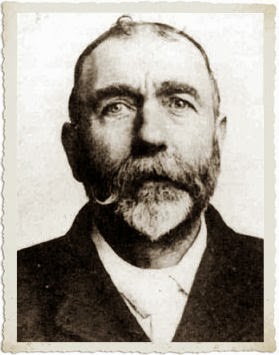 Dougal had been a Sergeant in the Royal Engineers when he married his first wife, Lovenia Martha in Nova Scotia who had died at the age of 37 on June 29th 1885, six weeks later he married Mary Herberta Boyd, who by the Oct 6th of that same year had also died aged 28.
With the loss of two wives in under 4 months, if anyone had suspicions, they had kept it to themselves.......
Dougal was fifty-two, a former soldier, a womaniser and a convicted forger who had been sentenced to 12 months hard labour, but had served only two months when he tried to kill himself and spent the remaining time in an asylum.

The ill-fated Miss Holland met Dougal in 1898, she was an independant fifty-five year old spinster with a small fortune of her own.
He was a charmer who soon overcame Miss Holland’s religious, moral and social scruples. Within three months they were living together as man and wife, however they never married.
There is no doubt that Dougal's motives were entirely mercenary, as he persuaded
Miss Holland to use nearly a quarter of her capital in buying Moat Farm, for which Dougal had the contract put in his sole name. However Miss Holland insisted that it be put in her name instead, perhaps she hoped that Dougal would settle down and farm; that he would stop his lecherous ways with other women and from drinking too much brandy.

Perhaps she felt she had finally found a man to love her or perhaps she believed her reputation was now so compromised she had to make the best of what she had.
In any case, she was not to know what his plans for her were and that her last attempt to assert herself might have been the very reason why she had to die – because Dougal knew he had not fully mastered her. 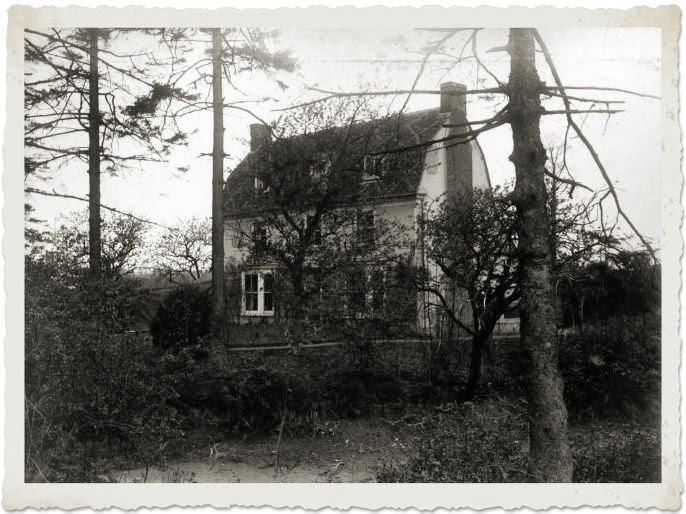 On 27 April 1899, Samuel Dougal and Miss Holland moved to Moat Farm, an isolated place surrounded by farmland between the village of Clavering and the hamlet of Rickling and so Miss Holland brought her little dog, Jacko with her to whom she was devoted.
The farm was at the end of a muddy cart track; the house, only accessible by a footbridge over the moat. The post was left in a box at the far end of the lane and every morning Dougal would walk down to collect it. No tradesmen ever called – everything was fetched in the trap.

On the 16th May several days after their new maid joined them, Dougal made inappropriate advances towards her and tried to enter her bedroom, she called to Camille who then slept with her for the next few nights.
On Friday 19 May, Miss Holland told the maid that Mr Dougal was taking her shopping in the trap, but a few minutes later as she waited by the bridge over the moat, Dougal shot her with his revolver. He then buried her in a disused ditch between the farmyard and the moat.

Later that evening Dougal returned alone. He told the maid that ‘Mrs Dougal’ had decided to go to London. The following morning, he claimed to have had a letter from his ‘wife’ (though the post had not arrived), saying that she had gone to stay with a friend.
This was of little consquence to the maid who had arranged for her mother to collect her that morning, after collecting her wages she promptly left.

On the same day he sent a telegram to his real wife ~ his third ~ inviting her down to the farm. He introduced her to the local clergyman as his daughter. The real Mrs Dougal was soon wearing some of Miss Holland’s clothes and jewellery, and generously gave the clergyman’s wife a shawl and some sheet music that had once belonged to her.

A few months later, Jacko, Camille's dearly beloved dog, turned up at the home of Mrs Wiskens, the Saffron Walden landlady that Miss Holland had resided with prior to moving into Moat Farm, whilst it was being made ready for her to move into. Mrs Wiskens, had been surprised and hurt that Camille had not said goodbye to her, so she wrote to Moat Farm, where upon Dougal eventually collected the dog. He avoided questions on the whereabouts of Miss Holland.

As the years passed, Dougal gradually sold Camille's shares and withdrew her money, it was easy for him to forge Miss Holland’s signature and so he transferred the ownership of the farm to himself. At first he was a popular addition to the neighbourhood – genial, talkative, an excellent shot; always ready to stand a drink or contribute to a good cause. He was noteworthy too for having one of the few bicycles in the neighbourhood, and also the very first car ~ which he referred to as his ‘locomobile’.

His biggest vice was women, for he had a succession of affairs close to home and barely
bothered to conceal them, this included a simultaneous relationship with two sisters and their Mother. He then denied paternity when served with affiliation orders.

People began to talk about Moat Farm. Stories circulated about Dougal giving bicycling lessons to naked girls in the meadow to the north of the house. ‘What a picture,’ wrote F. Tennyson Jesse in mounting excitement, ‘in that clayey, lumpy field, the clayey, lumpy girls, naked, astride that unromantic object, a bicycle, and Dougal, gross and vital, cheering on these bucolic improprieties...!’

People began to remember the past and started to ask questions about what had happened to Camille. Amongst them was the real Mrs Dougal, who had run off with another man, and whom Dougal was now trying to divorce.
Doubts soon turned into suspicions, and in March 1903, a trail of forgeries came to light after a close examination of Miss Holland's finances since May 1899. It soon became apparent that Dougal's invented story of Camille's departure was shown to be false and this led to a full-blown police investigation into Miss Holland’s disappearance. 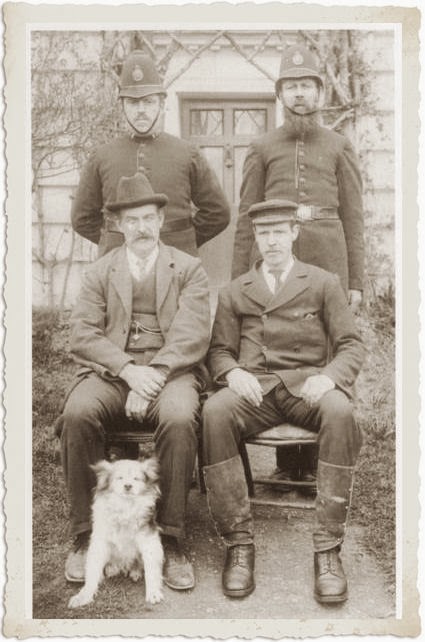 But even before the body was found, the case aroused widespread interest. Police took up residence in the house, they drained the moat and dug up many parts of the surrounding land.
According to The Times, six thousand ‘excursionists’ swooped on the farm during the Easter Bank holiday of 1903. Souvenir hunters were armed with ‘Kodaks’. Food vendors sold peanuts and other snacks. An enterprising photographer printed postcards of the scene and sold them to the tourists.

At last they found the body of a woman. The corpse had become quite decayed. But enough of the clothing remained for Camille's shoes to be indentified by her shoemaker as belonging to her. The pathologist remarked that had Dougal concealed her on the farmyard midden, the acidic nature of it would have left little or nothing to indentify.

On the 22nd June 1903, Dougal was charged that he did feloniously, willfully and with malice aforethought, kill and murder Camille Cecile Holland at Clavering.
Dougal pleaded his innocence saying that it had been a dreadful accident and blamed the excesses of too much brandy.
The jury took less than an hour to return their verdict of guilty, where the Judge sentenced Dougal to execution by hanging.
On the 14th July 1903 Dougal was hanged and buried in an unmarked grave in the confines of Chelmsford Prison. 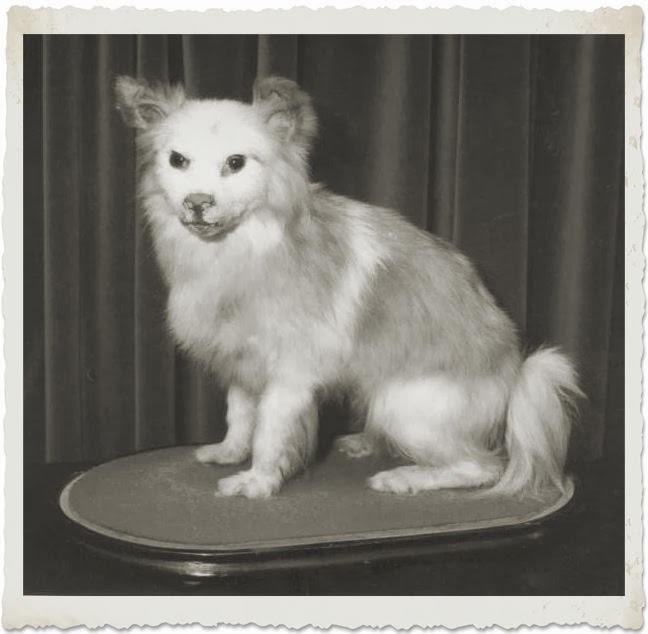 As for Jacko, Camille's much loved dog, he was given a home by the landlady Mrs Wiskens, and even after the dog's own demise, he remained an object of admiring curiousity when he was stuffed and placed on a side table in the parlour where Miss Holland used to sit.

- He is now to be seen on display in the Essex Police Museum.

Posted by Taphophilia Catafalque at 00:30