In my last post on Anchors, I knew that I had another one that could have joined the collection, it comes from San Michele, Venice.
I'm not sure why I held it back from joining the others, but as I flicked through the pages of 'Stories in Stone, a guide to cemetary symbols and iconography' I saw a symbol that I recognised immediately as that of a dolphin.
I had only believed it to be an insignia that related to this particular monument, for around the circle that frames the dolphin, is the word sommergibili (submarine). 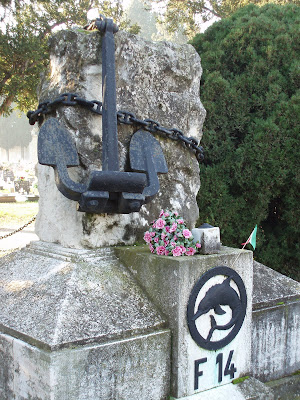 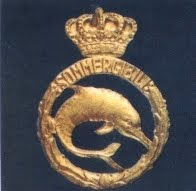 However the dolphin represents Salvation, Transformation and Love and this seems a most appropriate symbol given the circumstances.
The anchor is a real one, maybe even from submarine F14 (if they have them that is) and the story is a real tragedy.

For on the 6th Aug. 1928 the F14 was on manoeuvres with student engineers and at 8.40am was accidentally hit and sunk by the ship 'Missori' that was also engaged in the exercise. 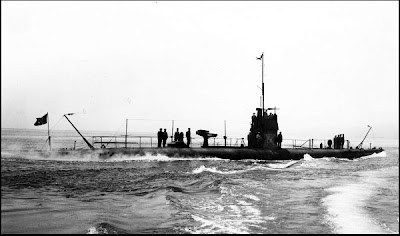 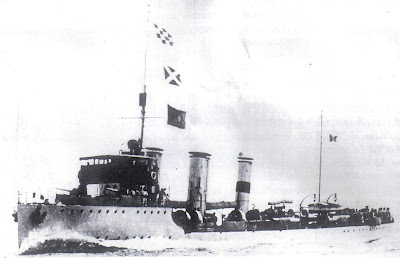 The F14 sank in waters of 40 metres in depth and so a rescue of the vessel began. Telegraph contact was maintained between the rescuers and the submarine, but as the oxygen ran out and carbon dioxide increased, battery acid that had escaped became chlorine gas and by 10.50pm all communications had ceased.

Eventually the F14 was brought to the surface and the bodies of all 27 crew members were recovered.
It was said that the bodies of two sailors were found hugging each other and as their tombs show, they will forever more remain by each others side.

The F14 Captain Leuitenant Commodore Isador Wiel wrote in his notebook :
"God , Family, Fatherland. And this will be our Gospel. We will bring our hearts, the impact on your graves because everyone knows how to die as the sailors of Italy." 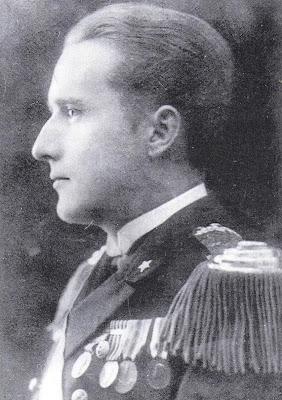 Posted by Taphophilia Catafalque at 22:01