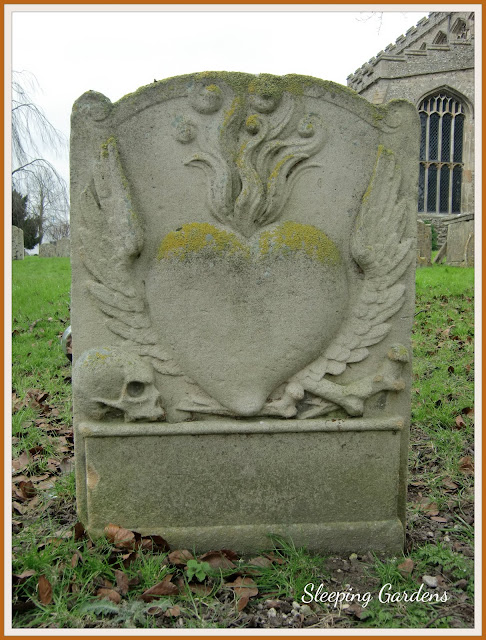 To the Memory of
The 78 People who were Burnt to
Death in a Barn at Burwell.
On Sept. 8th 1727
This stone was Cleaned and
This Inscription Engraved
Sept: 1910 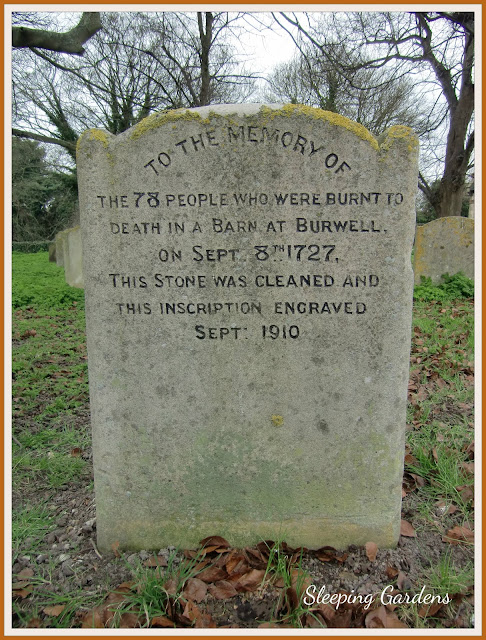 These two pictures show both sides of the same stone marker

In 1727 a touring Puppet show troupe visited Burwell and was held in a local Barn as many of the villagers turned out with great enthusiasm to view the show. To prevent anyone from getting in without payment, the one small door was nailed shut as the show began. As the blaze tore throught the barn, this act prevented people, many of whom were children, were unable to escape.
The victims of this tragic event are buried in a mass grave and the monument that marks the site depicts a heart enveloped in flames.
The following is an extract from the Parish Registers of Burwell:


'At about 9 o'clock on the evening of September 8th 1727, fire broke out in a barn, in which a great number of persons were met together to see a puppet show. In the barn were a great many loads of new light straw. The barn was thatched with straw which was very dry, and the inner roof was covered with old dry cobwebs, so that the fire like lightening flew around the barn in an instant. There was but one small door, which was close nailed up, and could not easily be broken down. When it was opened, the passage was so narrow and everybody so impatient to escape that the door was presently blocked up, and most of those that did escape, which was but very few, were forced to crawl over the bodies of those that lay in a heap by the door.'
'Seventy six perished immediately and two more died of their wounds within two days.'

'The fire was occasioned by the negligence of a servant who set a candle and lanthorne in or near a heap of straw which lay in the barn. The servant's name was Richard Whittaker, from the parish of Hadstock in Essex, who was tried for the fact at an assize held in Cambridge on 27 March 1728 but was acquitted.'

Posted by Taphophilia Catafalque at 13:05