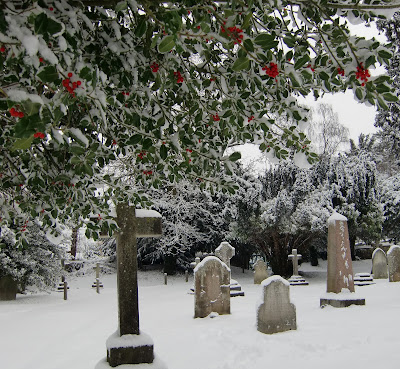 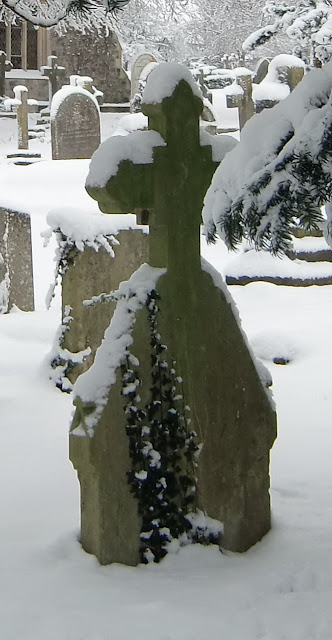 Holly's significance as a Christian symbol, is connected to it's prickly leaves and likened with Jesus' crown of thorns and the berries with the drops of blood shed for humanity's salvation, as related to in the Christmas carol, 'The Holly and the Ivy'.
Yet even here the reference to these two plants refers to a pre-Christian celebration, where a boy would be dressed in a suit of holly leaves and a girl similarly in ivy, to parade around the village, bringing Nature through the darkest part of the year to re-emerge for another year's fertility.
Like several other native trees it was felt to have protective properties, and there were taboos against cutting down a whole tree. Hollies were frequently left uncut in hedges when these were trimmed. A more arcane reason for this was to obstruct witches who were known to run along the tops of hedges.
The yew tree was another sacred tree of the Druids in pre-Christian times. They possibly observed the tree's qualities of longevity and regeneration (drooping branches of old yew trees can root and form new trunks where they touch the ground), and the yew came to symbolise death and resurrection in Celtic culture.
They will also have been familiar with the toxicity of the tree's needles in particular, which can prove fatal, and which may have further contributed to its connections with death.
The themes of death and resurrection continued into the Christian era, with the custom of yew shoots being buried with the deceased, and boughs of yew being used as 'Palms' in church at Easter. Yew trees have in fact established a popular association with old churches in Britain, to the extent that very old specimens of yew trees are now relatively rare outside of church grounds.
According to Richard Mabey in his Flora Britannica "... no other type of ancient tree occurs so frequently inside church grounds ..." and he goes on to say that he does not know of any other relationship between places of worship and a single tree species existing anywhere else in the Western world.
Yew trees have traditionally been planted beside churches. But in other cases it seems that very old yew trees may have already been growing on a site before the earliest churches were erected there; such as the one beside Fortingall's Church, Perthshire, Scotland may even predate Christianity itself. 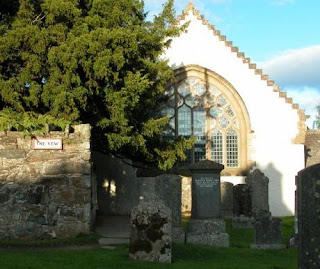 Several other yews growing by churches have become famous in their own right, such as the Bleeding Yews of Nevern in Pembrokeshire, Wales. 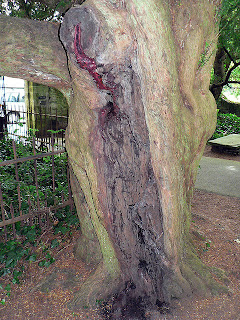 Posted by Taphophilia Catafalque at 19:12