I had never visited a modern exclusively Jewish Cemetery before. The only Jewish graves I have seen, ( apart from the mass graves at the Bergen-Belsen concentration camp )  are those that have been a part of a larger non-denominational cemetery. 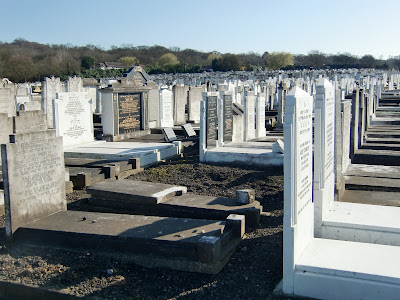 Most municipal cemeteries have special areas for the departed of other religions, where the funerary rites pertaining to the particular faith can be observed.
So whilst we were in Epping, Essex, we decided to visit the large Jewish cemetery there. 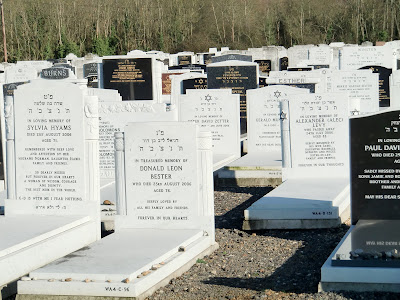 What struck me most, was the uniformity of the graves. Certainly no space is wasted between any of the plots, even the gap that you can see in the pictures above, are sites that are already reserved.
Another thing that I particularly noticed, was the absence of any floral tributes, with the exception of this one alone: 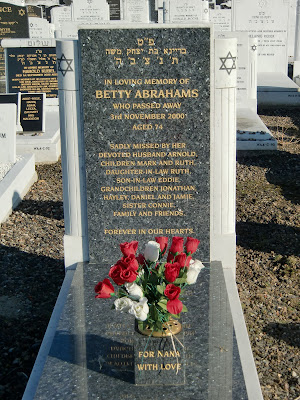 In Loving Memory of
Betty Abrahams
who passed away
3rd November 2000
Aged  74
I was surprised by the lack of flowers, as I knew very little of Jewish burial and mourning customs. However I was aware that a stone is often left at the grave site, to denote that it has been visited.
I particularly liked this one, where semi-precious stones and crystals had been left behind. 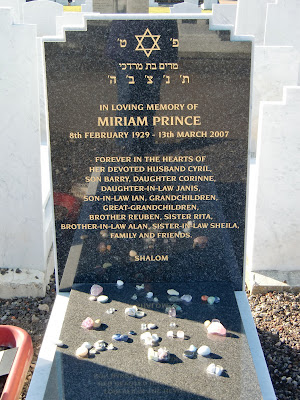 In Loving Memory of
Miriam Prince
8th February 1929 ~ 13th March 2007
I noticed how relatively similar all the headstones are in their design, with very little decoration other than the Star of David, the Menorah, Kohanim Hands and a Pitcher.
Hands indicate Kohanim, a person claiming direct descent from Aaron the brother of Moses. Kohanim holds an honoured status in the Jewish community and are required to offer a priestly blessing during the central prayer of the Jewish service.
The hands are placed into this posture, which forms an opening for the radiance of God to stream down on the congregation. 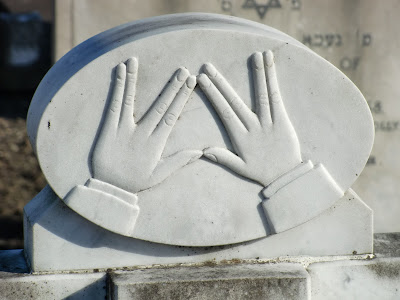 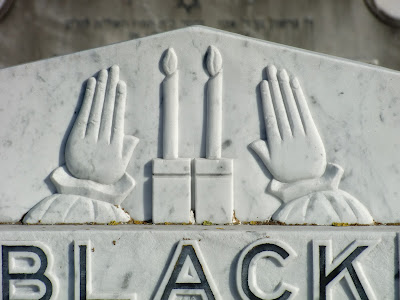 The pitcher signifies a Levite, who according to scripture was responsible for cleansing the hands of the temple priest ~ the Kohanim ~ prior to a religious service.
Aside from these cleansing duties, Levites were also musicians, singers in choirs and gatekeepers.
Today the Levites are the ones called on second ~ after the Kohanim ~ in the reading of the Torah. 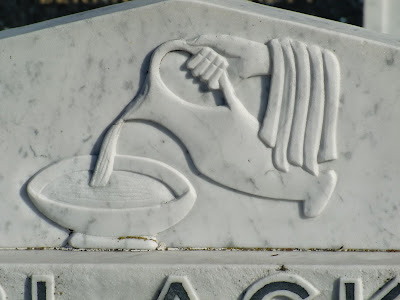 Posted by Taphophilia Catafalque at 12:59