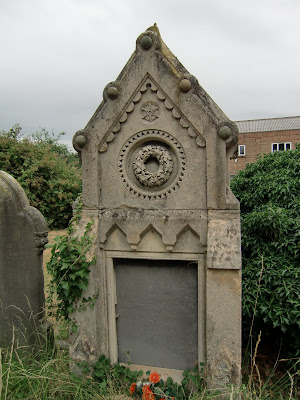 Mill Road, Cambridge
The Inscription reads:
‘Memory of James Reynolds
many years driver of the Telegraph Coach
from Cambridge to London
who died the 24th day of March 1868 aged 73 years
"All that live must die,
Passing through Nature to Eternity”. Hamlet’

In the early 1800s when the roads had improved beyond all recognition, travel eventually become ‘almost’ pleasurable. Coaches were able to attain speeds of up to 10 mph – cutting journey times by hours and in some cases days. What had been a two day journey from London to Cambridge (61 miles) in 1750, was possible in just six hours by 1836.

London predominated as the hub of all stagecoach services up until the 1750s, but within ten years, stagecoach services were operating between all major towns and cities and the number of provincial links had increased dramatically.
Local services were still served by carrier’s carts, generally operating between public houses, but the much larger inns, offering accommodation and fine food, were always the starting and terminating points for those travelling longer distances.

Ideally there were four coaches called Cambridge Telegraph – two at each end, one in service, and the other in reserve. In late 1700's it cost £4 a month, including the wages of horse keepers and stable hands, to keep a coach horse on the road. The horses trotted and tried to keep a steady pace of ten miles an hour. Galloping could only be sustained for a short distance and was only indulged in to make up lost time.The lifespan of a horse on a stage coach route was only 3 to 4 years and they were then sold to farmers for lighter duties.

Due to the population’s desire to travel, stagecoach capacity was increased. The maximum number of six passengers ( carried in the 1740s ) was increased to eight or ten (inside and out) by the end of the century, and by 1810 coaches were large enough to carry up to eight people inside in ‘reasonable’ comfort, with eight more taking their places outside – open to the elements but at a much reduced fare.
There were accidents though, carrying so many people as well as their luggage, often led to stagecoaches tipping over on the more winding roads. 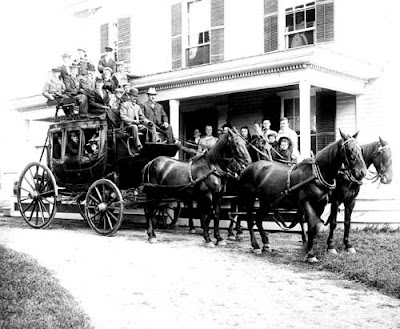 Journeys were also invariably long and tedious and frequent stops were made inns along the way. Tired horses would be changed for a fresh team and passengers were allowed 10–20 minutes for refreshments. For innkeepers the stagecoaches were a lucrative trade.
Although the coaching era spanned 200 years, the real boom was between 1810 and 1830. During this time a nationwide network of services had been formed and some 3,000 coaches, and 150,000 horses both private and mail, were employed in the transportation of people.
Freight continued to be carried by the more efficient canal system until the 1830s but then went by rail, as did the mail from London. It was the arrival of the railways that put the final nail in the stagecoach coffin, for although they continued to be used in rural areas for some years to come, most people wanted to travel by rail.

Posted by Taphophilia Catafalque at 01:17