Mill Road Cemetery in Cambridge is tucked away from view like a Secret forgotten Garden and can easily be overlooked. It's large size is surprising, considering it is accessible from two rather small unimpressive entrances, which give nothing away to the unknowing passerby. However the cemetery is in regular use, by dog walkers or those using the paths as a short cut through.
The Friends of Mill Road Cemetery host many community based activities for the entire family to join in, such a nature trails and creative fun days within the cemetery.
There are also some hidden Grade II listed graves, that are a treasure........ 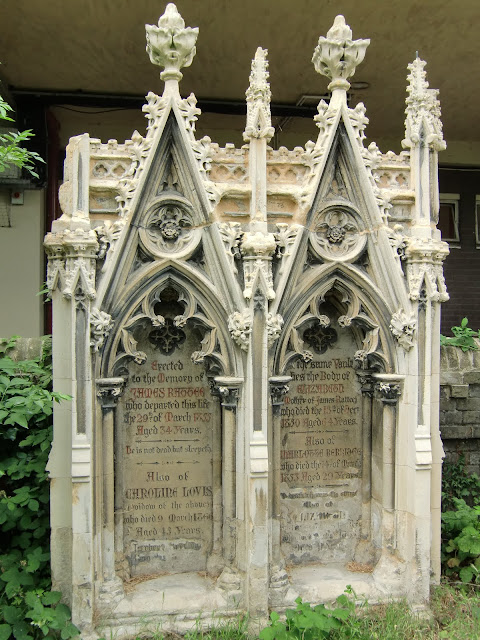 James Rattee was a highly skilled woodcarver and stonemason whose work can be seen in the chapels of Jesus and Magdalene Colleges and the Round Church in Cambridge, as well as in Ely Cathedral, Westminster Abbey and Eton College chapel.
He was born in Norfolk in 1820, and was apprenticed to a Norwich carpenter, who also taught him carving. He showed an interest in church ornamentation and restoration and first met George Kett while the latter was working on the restoration of Norwich Cathedral in the 1830s.

Rattee moved to Cambridge in 1842, and set up business as a woodcarver. His reputation as a craftsman grew swiftly and his successes included the carving of the choir stalls in Ely Cathedral, hailed as ‘the most elaborate piece of art workmanship executed since the Reformation’.
To expand the business, he asked George Kett to join him as partner. Their company was originally called the Wood and Stone Carving Works, Cambridge, though its name was soon changed to Rattee & Kett.
Although dedicated to his work, Rattee's health was not good. In 1852, his doctor advised him to take a break and he travelled to the Continent. While there, he spent time studying with master carvers in Cologne, Hamburg and Antwerp. On his return, he constructed George Gilbert Scott’s design for the five-panelled reredos at Ely Cathedral. In 1855, he suddenly fell ill with a cold and, already weak, was unable to fight the infection. Forty-eight hours later, he died at his home in Hills Road.
He was buried in Mill Road Cemetery on the afternoon of Good Friday, 1855, with a huge crowd in attendance, who came to ‘evince their admiration of his abilities and respect for his character’.
He was only 34. His widow Caroline Rattee retained a share and interest in the business of Rattee & Kett until her death in 1866. She is also buried in the tomb, as is James Rattee’s mother.
The monument is Grade II listed as being of historical or architechtural importance


The left-hand panel reads:
‘Erected to the memory of
James Rattee who departed this life
the 29th of March 1855 aged 34 years.
“He is not dead, but sleepeth”
Also of Caroline Louis (widow of the above)
who died 9 March 1866
aged 45 years’
(remainder illegible)
The right-hand panel reads:
‘In the same vault
lies the body of Elizabeth
(mother of James Rattee)
who died the 13th of Dec 1850
aged 64 years.
Also of Charlotte Berridge
who died the 14th March 1853
aged 29 years.
“Death where is thy sting”
Also of …’
(remainder illegible)
Posted by Taphophilia Catafalque at 01:08