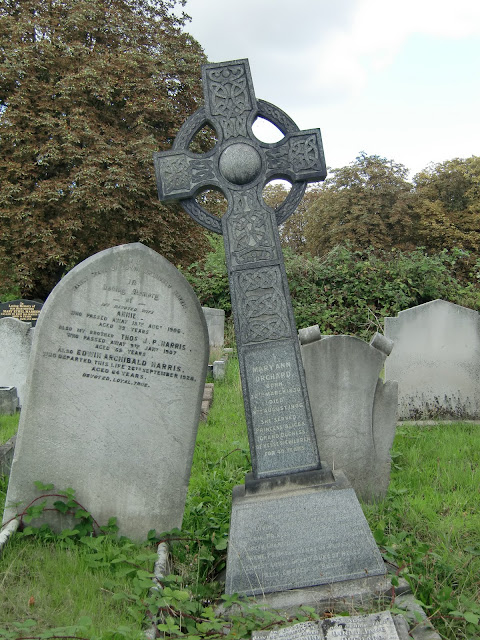 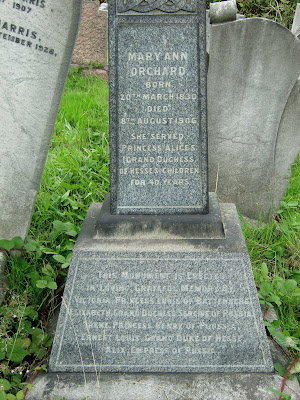 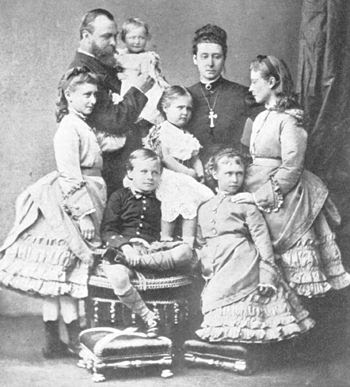 Above: Clockwise Elizabeth, Grand Duke Louis with May in his arms, Alice, Victoria, Irene: kneeling, Ernest Louis: seated, Alix: center
And it would be ( Princess Alexandra (Alix) ) who was to later marry Tsar Nicholas II and became the ill-fated last Empress of Russia, when the entire family and their faithful retainers were murdered during the Russian Revolution by the Bolsheviks in the basement of the Ipatiev House on 17th July 1918. 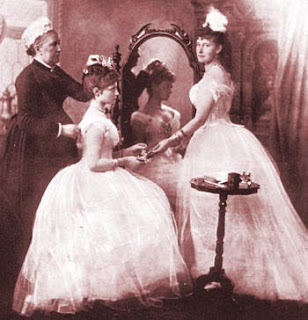 1889 Mary Orchard fixes Alix's hair, Elizabeth
Princess Alice and her husband Prince Louis of Hesse-Darmstadt lived in the small old-fashioned town of Darmstadt in the New Palace, that was built when their first home proved too small for their rapidly increasing family. It had a lovely garden, for it had originally been the Botanical Gardens. 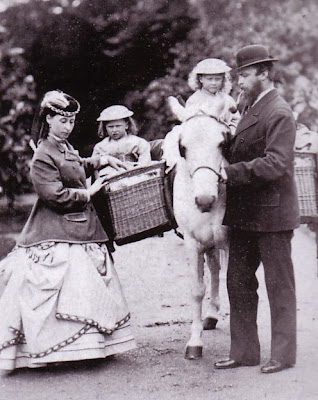 It was built according to the Princess's own taste and was made by its owner as much like an English house as possible. Life in the Palace was organized on English lines, and continued this way even after  Princess Alice's untimely death at the age of 35 years. 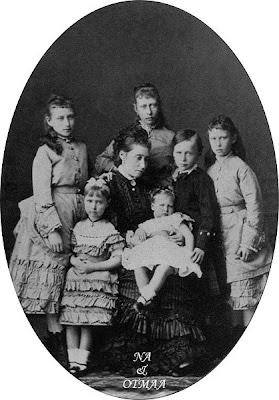 Life in both nursery and schoolroom followed definite rules, laid down by the children's Mother, based on the same simple lines as she herself been brought up by. Their father become Grand Duke upon the death of his Uncle in 1877.
The couple gave much of their income to charity, and the building of the New Palace had taken much of the Princess's dowry, so that before the Grand Duke's accession, they were far from rich.
The children were brought up in accordance with old-fashioned English ideas of hygiene, which were, at that time, far ahead of those in Germany. Their dress was simple and their meals of the plainest fare; indeed they all kept hated memories of rice puddings and baked apples in endless succession. 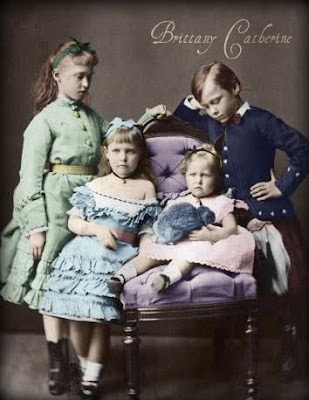 The nurseries were large, lofty rooms, very plainly furnished. Mary Anne Orchard, " Orchie" to the children, ruled the nursery. She was the ideal head nurse, sensible, quiet, enforcing obedience, not disdaining punishment, but kind though firm. Mary Orchard gave the children excellent nursery training and she had fixed hours for everything, the children's day was strictly divided in such a way that it allowed them to take advantage of every hour that their Mother could spare for them. 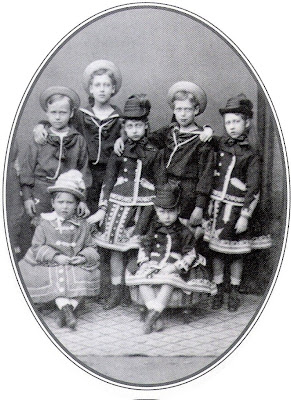 Hesse children with their cousin's the Wales's
On the same floor as the nurseries were the Grand Duchess's rooms, and there the little Princesses brought their toys and played while their mother wrote or read.
Toys were simple and sometimes all the old boxes containing their mother's early wardrobe were brought out for dressing up. The children strutted down the long corridors in crinolines, and played at being great ladies, or characters from fairy tales, dressed in bright stuffs and Indian shawls, which their grandmother, Queen Victoria, could not have imagined being put to such a use.
The Grand Duke was not able to be with his children much, but their rare games with him were a delight.


The children were full of fun and mischief and sometimes escaped Mary Orchard's vigilance, when once the children were chasing one another in the garden when Princess Irene and Prince Ernest ran over some forcing frames, carefully treading only on the stone. Princess Alix - who was six at the time-followed, but tried to run over the glass panes. She crashed through, and was so badly cut that she remained scared for life. 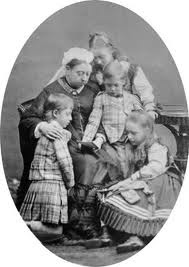 Every year the whole family went to England, staying at Windsor Castle, Osborne or Balmoral, according to Queen Victoria's residence at the moment. The Queen was adored by all her grandchildren. She was always a fond grandmother, and did not apply to them the strict rules that had governed her own children.
In November 1878, diphtheria broke out severely in the New Palace, and all the family, except Princess Elizabeth, went down with it. A serum was unknown, and the old-fashioned methods of treatment were powerless against the illness.
Queen Victoria sent her own doctor to help the German physicians. The Grand Duchess had a terribly anxious time and undertook most of the nursing herself. She sat up whole nights with her children, going from one sick-bed to the other. Except Princess Victoria, they were desperately ill.
In spite of all her devotion the "baby," Princess May, died on November 16th. Then her own weakened constitution could fight the infection no longer. On December 8th she fell ill and on December 14th she died as well.
Greatly lamented, both in Hesse and in England, while to her own family her death was a shattering blow. 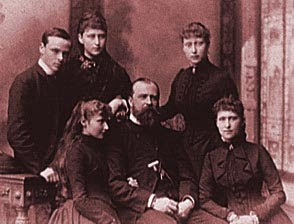 It took a long time for the family to adjust to a life which had lost the hand that guided it, for the Grand Duke Louis IV had scarcely recovered from his own severe illness at the time of his wife's death. All the children were moved as soon as possible into the unfamiliar surroundings of the old town-Schloss, and from its windows little Alix who was barely six, saw her mother's funeral procession wending its way from the New Palace to the family mausoleum at the Rosenhohe.
Prince Ernest Louis, now ten, had a tutor all day, and Princess Irene joined the elder Princesses in the schoolroom. Princess Alix remembered long afterwards, those sad months when she sat with old "Orchie " in the nursery and had looked up, to see her old nurse silently crying. The deaths of her beloved Grand Duchess and of Princess May had nearly broken her faithful heart.
The Grand Duke did all in his power to take his wife's place with his motherless children. He was a kind-hearted, honest man, with a wonderfully fair outlook on things and was adored by his children. Their Mother had always had the entire management of the children's education, and even after her death the Grand Duke scrupulously followed the directions she had given. 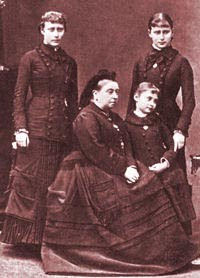 Queen Victoria, who was very fond of the Grand Duke of Hesse, treating him as a son, urged him to come to her with all his children as soon as possible, and in January 1879 the family went to Osborne for a long stay. Once they had recuperated, they returned to Darmstadt two months later, accompanied by Prince Leopold (Duke of Albany) who had always been a favorite Uncle.
The two elder Princesses tried to take their Mother's place as their Father's companions, and were constantly with him. The sixteen-year-old Princess Victoria looked after her brother and sisters, and acted as mistress of the house. That first year the Grand Ducal family went to Schloss Wolfsgarten, the new surroundings and their youth helped the children to recover their vitality.
They returned to the New Palace in the winter of 1879-1880, and Princess Alix began her solitary schoolroom life, having toiled at her spelling under faithful 'Orchie's eye', now came the somewhat formidable tutor Fraulein Anna Textor, under the general guidance of her Governess: Miss Jackson. The Romanovs
Posted by Taphophilia Catafalque at 16:43